Theatre Review: ‘Guys and Dolls’ at UB Center for the Arts 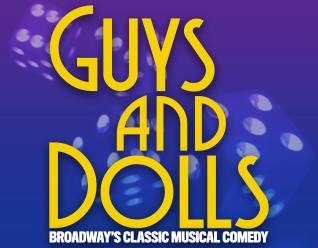 UB’s Department of Theatre and Dance has put on some real showstoppers during the past few seasons and kept that tradition going with their most recent production of “Guys and Dolls,” guest directed by Keith Andrews.

“A stellar production of a classic musical”

“Guys and Dolls” follows the overlapping stories of high-roller Sky Masterson, who falls in love with mission worker Sarah Brown, and lovable rapscallion Nathan Detroit, engaged for 14 years to Miss Adelaide, a headliner at the Hot Box Club.

The four actors leading the show in those roles were perfectly cast and shine brightly throughout the show. Rory Tamimie leads the pack as Sky with an incredible voice and suave demeanor to match. Anna Fernandez does a great job in trying to resist his charms as Sarah, determined to not fall in love with a gambler. Sarah’s iconic songs including “If I Were a Bell,” require a legit soprano to belt them throughout the show and Fernandez definitely delivers.

Hannah Keller portrays Ms. Adelaide, the finest of her roles on the UB stage to date. I’d suggest running to grab tickets for her incredibly strong, sassy and confident version of Ms. Adelaide. Keller belts out “Adelaide’s Lament” with ferocity and incredible vocal power while still maintaining Adelaide’s iconic voice and personality. Michael Wells is a great match for Keller as Nathan Detroit, the gambler who seems to constantly run out of luck, and exercises great comedic timing and smooth vocals in a role made famous by Frank Sinatra and Nathan Lane.

“Guys and Dolls” also includes noteworthy performances by Thomas Evans as Nicely Nicely Johnson and Daniel Pieffer as Benny Southstreet. The two shine on the title number, playing off each other well and Evans brings the house down during the ever popular Act II number, “Sit Down, You’re Rockin’ the Boat.”

The set was mostly bare and angular two-story buildings that served as the canvas for some amazing projection work by Alex Sansolo and Steven Zehler. Between the glowing theater signs of Times Square, the building exteriors and a collage of newsprint, the design quality was truly outstanding.

Additionally, Nathan R. Matthews led an incredible orchestra, performing the full score with such brass and precision that is sometimes hard to come by in local theaters these days.

If you’re in the mood for a fun and heart-warming classic musical, then look no further. “Guys and Dolls” is a stellar production of a classic musical led by a phenomenal quartet.

Running Time: Approximately two and a half hours including a fifteen-minute intermission.

“Guys and Dolls” runs through November 24 at UB Center for the Arts. For more information and tickets, click here.

Tagged as: UB Center for the Arts