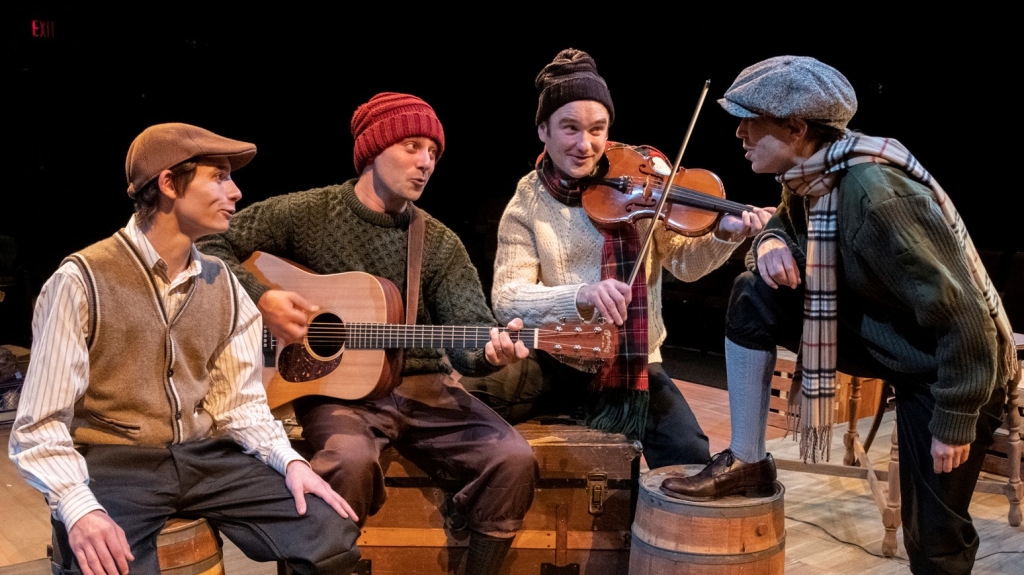 There was the time when it was snowing in Wales, and Dylan Thomas recollected it as a beautiful, memorable moment, because “it always snowed at Christmas.”

From these sweet memories, Thomas penned “A Child’s Christmas in Wales,” a work of short prose that was later retooled for the stage. Irish Classical Theatre Company’s latest production of this Christmas classic opens on Friday, November 22.

Ironically director Chris Kelly admits that he never saw this show on stage. “In fact, I never read it until Vincent (O’Neill) approached me about directing it,” Kelly says. He was immediately taken by the story’s warmth and universal appeal. “We all have families, biological or chosen,” he said, “And we gather to celebrate regardless of our religious beliefs. Often, we find our families are a delightful and maddening cast of characters. It is a heart based patchwork of different Christmas memories stitched together.”

Some of the region’s most familiar stage actors are in the cast, including O’Neill as the mature DylanThomas, Michele Marie Roberts, Ben Michael Moran, Christian Branjes, Charmagne Chi, and Greg Gjurich. And they are ready to embrace the spirit of the season with a pine-cone-covered vengeance. Chi – cast as Aunt Bessie -, says, “ I love theater and I love Christmas so doing a Christmas show was a no-brainer. Christmas is magical and so is this show. It’s this simple, rustic, intimate, family Christmas that the audience gets to peek into. Like those ornaments that are houses but when you turn them around, you can see all the adorable things happening inside? That’s this show, if this show was an ornament.”

Gjurich (Uncle Tudyr) agrees, saying,“This production is oh-so-special for a couple of reasons. The whole sense of nostalgia of family gatherings during the holidays brings back such fond memories of my own Christmases, and (and most especially) the privilege to work with old friends and new!  Everyone (management, tech crew, actors) is just so dang talented, collaborative and FUN.”

For Michele Marie Roberts (Mother),  she “adores every relatable holiday moment that’s played onstage. Arriving to dinner, gifts, dozing off after dessert, singing carols around the piano. It’s a truly beautiful, nostalgic piece of theatre that allows you to experience the magic of Christmas through the eyes of a child. And yes, I can’t wait to share this one with my kids.”

ICTC has staged “A Child’s Christmas in Wales” three times previously, and O’Neill says this production sticks with a traditional approach. But be prepared! O’Neill says, “Chris Kelly is such an inventive director (as audiences discovered in his brilliant and playful ‘Sense and Sensibility’last season ) that we can expect a very fresh and creative staging of the piece, without losing an iota of the Christmas spirit which infuses the play. The cast has for the most part worked closely with Chris in past productions, and is very open to improvisation and to adopting a refreshingly physical approach to the production. And with the musical expertise of Joe Donohue and Brandon Barry in the mix, audiences can expect a vastly entertaining experience.”

It is Thomas’ words – so elegant in their simplicity – that makes this collection of stories so vivid, real, and heart-felt. O’Neill says, “Thomas is a consummate word-magician and shares (James) Joyce’s Celtic delight in word-play as he weaves a musical tapestry of language which captures the very essence and spirit of Christmas. It is a privilege to play the role of Dylan Thomas himself.”

Sounds like the perfect way to transition from fall into the spirit of the season. Share it with someone you love.

“A Child’s Christmas in Wales” opens Friday, November 22 and runs until December 15. Tickets and details at http://www.irishclassical.com.