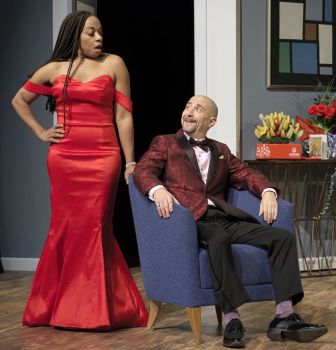 The cast of “Division Street” at JCC Centerstage.

I had the great honor of experiencing the world premiere of “Divisions Street”, written by Jason Odell Williams (“Church & State”, “Handle with Care”) who returns to Rochester to collaborate once again with JCC Artistic Director Ralph Meranto for this provocative three-actor show. The two previously collaborated on 2016’s “Church and State.” The three roles are played by David Andreatta (Rob), Esther Winter (Nia), and D. Scott Adams (Trey).

The play is set in present day. The plot—in a nut shell—is about celebrity couple’s interracial marriage (Rob is a white Jew and Nia is black with no clear religious affiliation) and how their respective careers are hitting opposing inflection points. Rob has been nominated for a Golden Globe for a movie role as a racist cop who shoots an unarmed black youth. Nia’s career has gone from shooting start status to stagnant. The play takes place in real-time, in the 90 minutes before the limo comes to pick them up for the Golden Globes. The play is described as a bold comedy-drama about race, media influence and the Hollywood movie machine but it is so much more.

Adding to the tension of a pressure cooker of a night is Rob and Nia’s long-time friend and co-producer of the movie Rob has been nominated for, Trey. He was the character over whom I did the most head-scratching. He is a white man who has adopted all the affectations of a black hip-hop artist—not because he grew up in the culture but because he chose the culture. At first, I wondered if that was realistic. Then I harkened back to a friend from high school who was so into the Beatles that he adopted an English accent and the gentlemanly demeanor of Paul McCartney. Kind of strange for a kid in a suburb of New York City in the late 80s but he never wavered and continued that way into adulthood.

This play takes on a lot of complex issues. It made my head spin trying to imagine how I would feel if I were participating in each of the tension filled conversations that were happening before my eyes. There were moments of humor interjected to lighten the mood but, as a privileged white woman, I held my breath through the humor. This play successfully does what theatre should do. It forced the audience to empathize with conflicting points of view and introduced ideas many of us have not previously explored. It is unapologetic as it puts a spotlight on racial identity, perception, and misunderstandings. This enlightening play gave my guest and I much to talk about afterward. And as one of Nia’s lines so simply and hopefully states, “It’s nice when people listen, learn, and change”.

“Division Street” runs approximately 90 minutes and is performed without an intermission.

The show runs through Nov. 17 at the JCC Centerstage in Rochester, NY. For more information, visit: https://jccrochester.org/centerstage