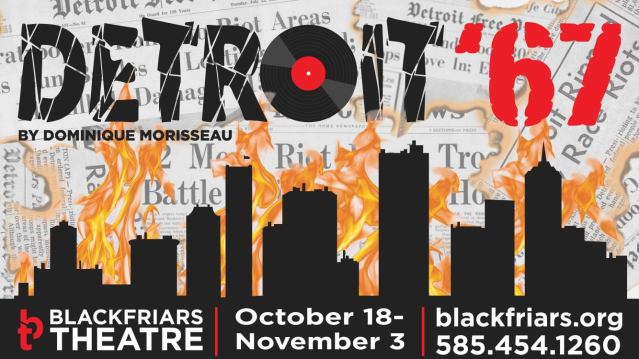 Set in July 1967, a time which would become known as the Long Hot Summer as race riots plagued American cities such as Newark, Buffalo, Rochester, Boston, Chicago, Milwaukee and of course, Detroit, Dominique Morisseau’s play Detroit ‘67 leaves the audience with a lot to reflect upon.

The play opens in the basement of siblings Chelle and Lank’s house. They’ve buried their father six months prior and now that the will has been settled, are ready to start getting their lives back to normal. Normal includes after hours parties in their basement to help pay the mortgage as well as tuition for Chelle’s son to attend the Tuskegee Institute. They both agree the inheritance they received will be used primarily to pay for tuition, but once Lank’s friend, Sly informs him a local bar is being sold soon, Lank’s view of where this money should go to changes. As Lank and Sly try to convince Chelle the bar is a way to have a legitimate business of their own and a steadier income, tensions between the Detroit police and the African American communities continue to mount.While the violence in the streets rises to a fevered pitch, Lank and Sly bring more tension to the basement setting when they bring home Caroline, an unconscious white woman. Having found her disoriented and badly beaten in the streets, Lank insists on bringing her home in case whoever did this was coming back to finish the job. Chelle and Sly both argue this decision is foolhardy and will only bring trouble to the family, but Lank’s compassion for Caroline’s humanity eventually rules out and Chelle agrees to allow her to stay for a week if she helps them with their after hours parties. On the surface this proves to be a good idea since their revenue from parties increases significantly, but as more comes out about Caroline’s back story (some of which is provided by Chelle’s close friend, Bunny who has her finger on the pulse of the neighborhood’s information line) conflict continues to rise between the characters mirroring the violence that is increasing in the streets outside of the safety of the basement walls.

Detroit ‘67 covers obvious topics of race relations, police violence and class struggles, but also delves into topics of love, family connections, the desire to make a better life for oneself, make your mark on the world and keep those around you safe. Chelle and Lank struggle with their conflicting viewpoints – Chelle wanting the safety of what she has and only willing to look as far as tomorrow; Lank wanting something more for himself and to have a future more secure than it’s been. Chelle is the realist, viewing things as they are. Lank is the dreamer, seeing things as what they might be. Throughout, the one constant is their deep love for one another as family and their commitment to stand by one another no matter what. “We stuck together at the root.” as Chelle says to Lank at one point.

Punctuating the play and enhancing the underlying themes is a steady stream of Motown music. With such well known groups as The Temptations, Marvin Gaye, The Four Tops and Martha and The Vandellas, the music helps to set the atmosphere of the time. Lyrics which many of us sing without a second thought, become so much more poignant when set against the action on stage.

As powerful as Ms. Morisseau’s play is, it’s the actors in this production who truly bring it to life, forcing the audience to confront the harsh truths which are presented. Ashona Pulliam as Chelle puts on an amazing performance bringing the full range of emotions of the character to the stage. Chelle’s internal struggle with the desire to support her brother’s dreams and the need to keep him safe in the reality of the world they are living in and the violence that is erupting around them is palpable to the audience. Pulliam’s talent shines as the audience watches Chelle fight to keep her heart safe from further hurt while being pulled toward the love that Sly offers. Tahina McPherson as Bunny offers the audience a much needed comic relief in a play filled with heavy, emotional topics and helps bring the self-assured character to life. McPherson’s Bunny acts as a softening in some ways to the intensity of Pulliam’s Chelle. The two actors work well together on stage, building off of each other’s emotions and creating an ebb and flow the audience can relate to. Aceyon Owens’ Sly, much like McPherson’s Bunny often adds an element of comic relief to a scene. In addition, Owens helps bring to life the struggle Sly experiences trying to make a living for himself as an African American man living in the ghetto of Detroit – trying to make ends meet, the struggle to get a foothold in life and the intense frustration at being blocked by white authorities (often crooked police) at every turn. Laron Dewberry’s Lank and Melanie McBride’s Caroline provide an idealistic view of what the world could be. Dewberry brings an intensity to Lank’s desire to make a better life for himself as well as a softness to Lank’s view that maybe the world can be a different place than what currently exists if we can see the humanity within each other. McBride’s Caroline brings the conflict of the streets into the family dynamics of Chelle and Lank, and forces the audience to question their own beliefs of what reality is.

Detroit ‘67 runs at Blackfriars Theatre until November 3rd. See it while you can. It truly is an amazing performance, and make sure to leave some time after for much needed discussions on the many topics this play brings up which continue to be relevant today.

Run time: 120 minutes with one intermission

Deals with adult themes and topics

Detroit ‘67 is playing at Blackfriars Theatre until November 3rd. Get your tickets at www.blackfriars.org