Theatre Review: ‘Come From Away’ at Shea’s Buffalo Theatre 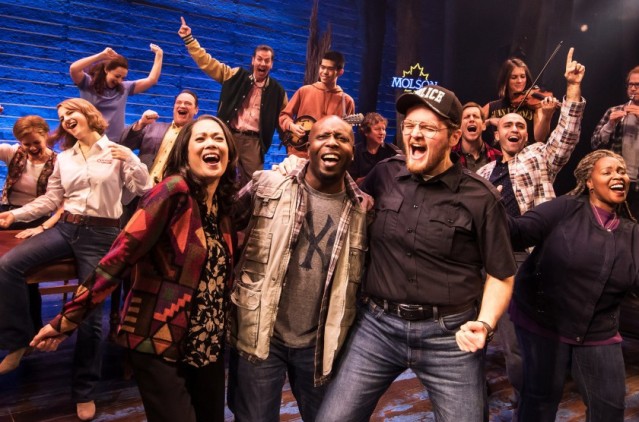 The National Touring Cast of “Come From Away.”

I was in 5th grade on that day that the world stopped. I remember that no one told us anything in school, but the teachers in the hallway were all talking. There was some crying. There were some screams. My friends and I sat there wondering what was happening. We were 10, so we were not the first ones to get information. Even if we did get information, we wouldn’t have understood. It wasn’t until later that night when I got home from school that I learned about the tragic events that occurred in New York and Washington. Years later, I have had the opportunity to visit memorials at the World Trade Center and at The Pentagon. I can’t even imagine witnessing those events first hand.

“Come From Away,” the Broadway smash hit, tells the story of a small town in Newfoundland called Gander.  In it, there is a huge dilapidated airport where planes coming from Europe would stop to refuel at. Since the jet engine was created, planes can cross the ocean on a single tank of fuel, so there really isn’t much need for the airport anymore. That is until the US Airspace is closed on September 11, and 38 planes from all over the world land there. Seven-thousand people from around the world are brought to Gander against their will, and those on the planes have no idea where they are. What happens? People open their doors to their own home to help these people who are stranded for five days. Humanity at its finest.

This is the second time I have seen this show, and it will definitely not be the last. The last time I saw it was at the Royal Alexandra Theatre in Toronto in 2018. I was blown away by this production, and since then, the show has been extended two or three more times. It’s pretty much printing money at this point. It’s not a phenomenon. It is just fantastic storytelling and I believe that this might be the best story ever told. The music, the blocking, the vocals, and the pacing keep this story rolling. There is no intermission, and at no point are you bored or itching to get out of your seat.

The show is an ensemble piece, where the actors seamlessly portray numerous characters. Newfoundlanders, Plane People, and other characters are all present in this story. The actors are so incredibly talented, and they give this story their absolute all. To name anyone specifically would be a disservice to the entire cast because each one of them is just absolutely captivating. It is also great to see a veteran cast of all shapes and sizes. This isn’t one of these shows where the cast is young, ripped, and all similar. This cast is full of character actors who give strong and enjoyable performances. I could watch them perform all day.

The scenic design by Beowulf Boritt is so brilliant for this show. It would appear to be a minimal set, but with a story like this, you will have no problem filling in the blanks. Your imagination will run wild.

Christopher Ashley has directed a production that will live on in the memories of all those who see it, just like the memory of 9/11 stays with all of us who were there. Irene Sankoff and David Hein have crafted a musical that takes all the wonderful aspects of humanity and shows that people are truly, inherently, good. It has also put Gander on the map. My girlfriend and I are talking about going to visit!

Do yourself a favor, go see this show.

“Come From Away” runs until October 20, 2019 and is presented at Shea’s Buffalo Theatre. For more info, click here. You can also see it in Toronto, running until March 1, 2020. Click here for info.

Tagged as: Come From Away, Shea's Buffalo Theatre