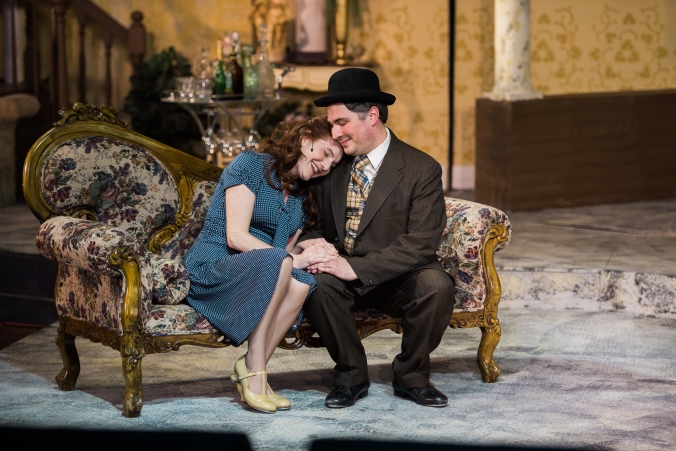 The cast of “Me and My Girl” by Niagara Regional Players

The British musical comedy “Me and My Girl” has settled in for a three week run at The Ellicott Creek Playhouse with a production by Niagara Regional Theatre Guild.The show was written by Noel Gay, Douglas Furber, and L. Arthur Rose, and it opened in London in 1939. Over the years, “Me and My Girl” was best remembered for its hit song, “The Lambeth Walk.”

Almost 50 years later, the show was revised by Stephen Fry and Mike Ockrent, and it became a hit in London and New York all over again. The tunes are peppy, and there are lots of amusing one-liners. I particularly enjoyed the Stephen Fry touches including “blank rhyming slang,” historical references, and the Pygmalion deus ex machina. Although this is a revision of the original material, “Me and My Girl” still retains the traditional British music hall flavor and it’s fun to watch.

This is a play about the gap between the aristocracy and the cockneys in England. It’s delightful when everyone discovers that, whatever their upbringing, rich people and poor people aren’t so different after all.

Joseph Fratello is strong in the leading role of Bill, a would-be Earl. Mr. Fratello is brash, funny, and good natured with lots of energy and a pleasant singing voice. His performance lights up the stage.

Playing opposite Mr. Fratello is Emily Plotkin as saucy Sally. She is endearing; you can see why Bill would be willing to forgo his new found fortune for her! Ms. Plotkin is a triple threat – creating a three dimensional character, giving the ballads her all, and even tap dancing.

Also noteworthy are Chris Andreana who has an adorable propensity for singing about being an attorney, statuesque Lauren McGowan as the scheming Lady Jacqueline, Adam English as the staunch butler, Dan Zerpa who shines in the Act 2 opening number, Dawn Marcolini Newton as the formidable Duchess, and Chuck Slisz as her stalwart companion.

Nicely rounding out the cast are Tim Goehrig in an amusing turn as an educated policeman, Joanne Perf and Eric Bloom as a doddering lord and lady, Kim Petersdorf giving a warm and believable performance as the cockney landlady, Gary Gaffney as a nobleman with an ear trumpet, and a large hard working ensemble of folks who have lovely singing voices. In the best tradition of community theatre, people of all generational groups are in the production. It’s nice to see a chorus with a diversity of people in it, as opposed to a chorus of look alike Barbies and Kens.

Incidentally, the English accents throughout the production are darned good!

Director Fran Newton keeps this long show moving at a spritely pace and choreographer Dawn Marcolini Newton’s Lampbeth Walk is (appropriately) the highlight of the evening. The number has everything that it’s supposed to have according to the annals of musical theatre history, including duchesses who are surprised to find themselves dancing and people playing the spoons!  It’s a real treat!

A side note: when the script calls for smoking, the actors use unlit cigarettes — a director’s choice that was much appreciated by the audience.

The sets, which were designed by Fran Newton, make prodigious use of a turntable, and the many set changes were well executed and speedy.

Kudos to costume designer Nancy Watts for literally hundreds of lovely gowns! Each member of the chorus must have had a half a dozen costumes! Costume wows include plaid suits and gorgeous wedding gowns. There are lighting quick costume changes, too, and everything went smoothly.

Although I don’t usually include the Stage Manager in these reviews, I want to congratulate Taryn Goehrig who is overseeing a massive production, technically, that was presented without a hitch.

This is a high-spirited and satisfying show, and it’s recommended for the whole family.

The production is 2 hours and 45 minutes, including intermission.

“Me and My Girl” runs until May 19, 2019 and is presented at the Ellicott Creek Playhouse. For more information, click here.