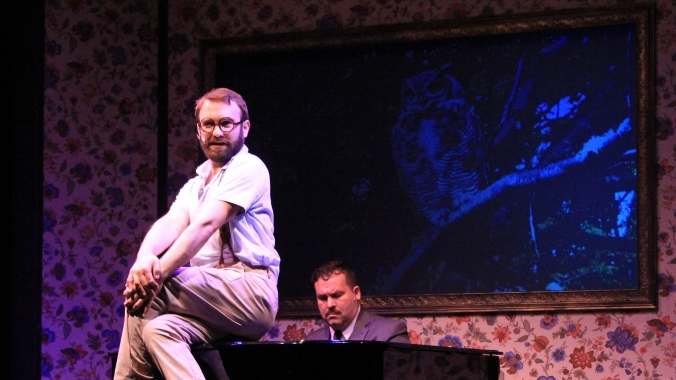 Joseph Donohue III and Philip Farugia in ‘Murder for Two’ at MusicalFare!

Summer theater faces a unique challenge, in my opinion. Our summers are so short that if the show isn’t outside, regardless of its subject, there’s not a lot of motivation to skip out on a summer afternoon or evening to sit in a dark theater. However, if my budget was limitless, I’d spend every night at MusicalFare’s side-splitting “Murder for Two.

“…unforgettably hysterical. Add this to your summer bucket list!”

MusicalFare’s production, directed and choreographed by Doug Weyand, is a two man show following the aftermath of a murder at a notorious author’s birthday party. A loveable Philip Farugia plays the wannabe detective investigating the murder and the wildly talented Joseph Donohue III portrays, well, everyone else. On top of that, Farugia and Donohue take turns accompanying each other on the piano, sometimes resulting in four hands crowding the keys.

Despite many characters and very few actors, the show is incredibly easy to follow. Donohue handles the switches between characters with ease and doesn’t mix up any of their voices, body stances or mannerisms. In addition to it being impressive, it’s also hilarious. The crowd couldn’t stop laughing for the nearly two hour show, soaking in Farugia and Donohue’s excellent comedic choices.

Farugia is a great match for Donohue’s ever-changing characters, never missing a beat. He’s loveable, relatable and an all-around delight, especially when tickling the ivory keys. Farugia also works well with the audience, especially when one member is asked to come onstage when they run out of actors.

There was one moment in particular where the audience especially appreciated the duo, and that was when they handled the unfortunately common issue of a cell phone going off during the show. The scene was moving right along but it became clear that the audience was distracted. Thanks to an earlier gag in the show, Donohue was able to seamlessly add an extra comedic moment, without dropping character, and berate the audience member for having their phone on. Immediately the tension dissented, the phone was shut off and the duo received applause and a couple cheers before continuing on with the performance.

Bravo to MusicalFare on an amazing end to their season. “Murder for Two” is unforgettably hysterical. Add this to your summer bucket list!

“Murder for Two” runs through August 12 at MusicalFare Theatre in Amherst. For more information, click here.