First Look: ‘Forget Me Not’ at Kavinoky Theatre 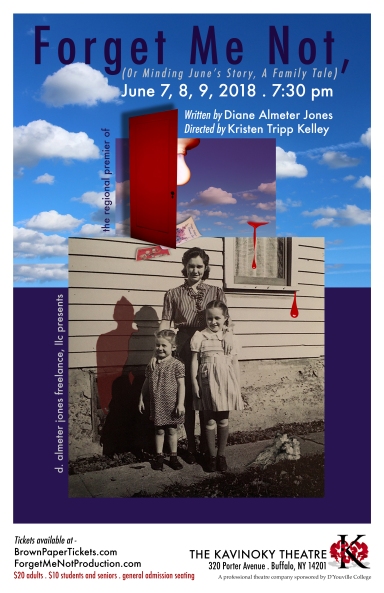 In a city that is known for performing the tried and true classics, it is rare that a unique original work makes its way to a Buffalo area stage. Tom Dudzick, A.R Gurney, and Neil Simon are household names in the area, but the name Diane Jones is one that may not be as familiar, unless of course you have read a playbill from the Kavinoky Theatre. The interesting thing, is that Jones will be sharing the title of playwright with these well known names this June when her original one act play, “Forget Me Not” is performed at the Kavinoky Theatre.

“This is a culmination of six or seven years,” says Jones, “I started this script in an Intro to Theatre class at SUNY Buffalo State in 2012, and since then I have re-wrote it, workshopped it, and gotten wonderful feedback.”

Jones’ work, entitled “Forget Me Not” was selected in the Road Less Traveled Manny Fried New Play Workshop, where she was given wonderful guidance to make her script work. “You really learn a lot about your work and how to better it when you go through a process like this,” laughs Jones, “as an artist I was used to critiques, but this was a very rewarding experience.”

“Forget Me Not” is based on a true story of Jones’ Grandmother June, who receives a telegram in 1945, saying that her husband had died in the war. As the story unfolds, June has to learn how to deal with a situation of this magnitude, and also has to deal with being visited by her dead husband.

“I had acquired a box of letters from my Grandfather that he wrote while he was in the war,” says Jones, “and while I was reading them, I thought, this would make a great play. When it came to the war in 1945, no family was untouched by it.”

Jones never met her Grandfather, but she says that through writing this piece, she has had the opportunity to really learn a lot about him. “There was stuff that I learned that my family had forgotten. I read an early draft of the script to my family members, and at the end they were speechless. It really hit home for them, and I knew that this story would be really relatable to others.”

Jones is very excited that she is able to produce her show on the Kavinoky stage. “I feel honored. I call this place my home! I love the collaboration that comes with putting together a show like this. The finished product is nice, but I like the process more.”

“I think the audience will find authenticity in this story, and with that, they will be able to relate,” says Jones, who goes on to say that a similar thing has happened with Tom Dudzick’s “Over The Tavern.” “Dudzick had success with his show because so many people were able to relate to the authentic experience that they remember.”

“Forget Me Not” runs June 7, 8, and 9, 2018, is produced by Diane Jones, and is presented at The Kavinoky Theatre.  For more information, click here.

Tagged as: Diane Jones, Forget Me Not, Kavinoky Theatre