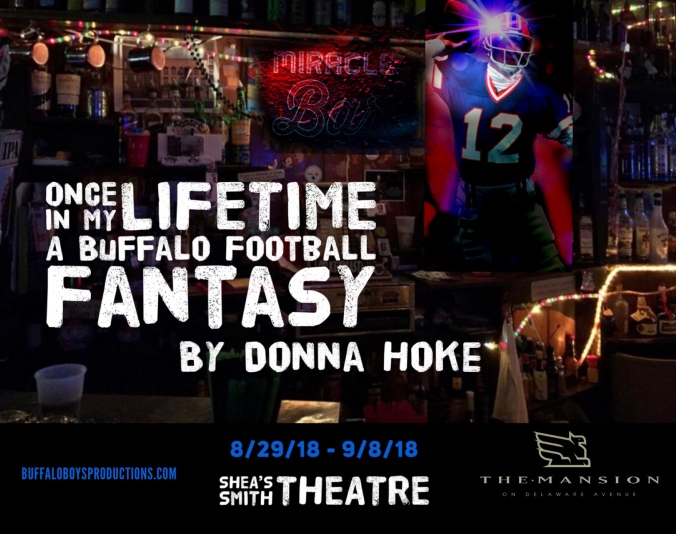 Buffalo, NY: May 2, 2018: This summer, Bills fans, Buffalo fans, and theater fans can begin the 2018 season with an exciting new play that is a love letter to all of them. Written by WNY’s award-winning playwright Donna Hoke, ONCE IN MY LIFETIME: A Buffalo Football Fantasy is the most exciting event to hit the Queen City since the Bills made four straight trips to the Super Bowl–but with a happier ending. This one-of-a kind presentation employs an entirely local creative team of Buffalo’s finest theater professionals and will feature a surprise cameo each night.

Tickets go on sale Friday, May 11th. Each show allows for eight audience members to sit on stage in the thick of the action; these tickets are reserved on a first-come, first-served basis for a nominal additional charge. The Shea’s Bistro Bar will act as the tailgate and the postgame party in a community wide celebration.

“ONCE IN MY LIFETIME is a celebration of my love of the Bills and their fans,” says producer Chris Braun, Buffalo Boys Production, a 1979 West Seneca East graduate who now lives in San Jose, CA. “The Bills have been part of my identity for 47 years, even after the Navy moved me to California. [Once I had this idea], I thought if I could find the right writer to give it a Buffalo twist with some clever nuances, I might have a project. When I read about Donna Hoke and then talked with her, I knew I had struck gold.”

Award-winning playwright Donna Hoke’s work has been seen in 46 states and on five continents, but she’s thrilled to have penned this fantasy that will play in her hometown. “It’s as much a Buffalo story as it is a Bills’ story,” she says. “Chris’ prompt was clear: somehow in the play, the Bills have to win the Super Bowl. But no story is ever just about winning; it’s about why people want the win, and what it means to them when it happens.”

ONCE IN MY LIFETIME kicks off at the intimate Shea’s Smith Theatre with a discounted preview on August 28, and runs for fourteen additional performances through September 8, closing the Saturday before the first Bills game of the season.

For one night, fans at the downtrodden Miracle Bar discover that the impossible happens when you believe it can.

Will you be there?

ONCE IN MY LIFETIME is produced by Buffalo Boys Productions.