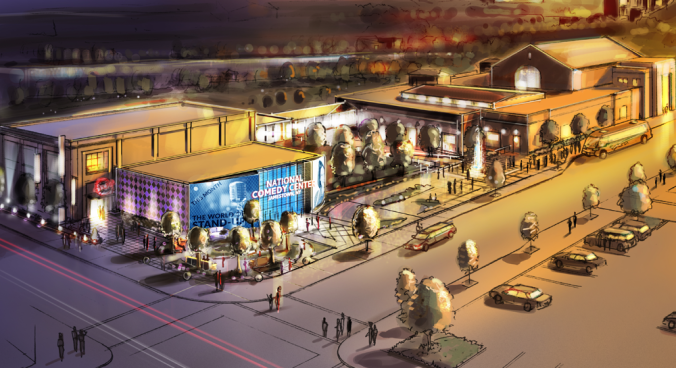 The National Comedy Center will open in Jamestown this August.

During the 2011 Lucille Ball Comedy Festival, festival curators worked on reestablishing the festival, by trying to bring comedy back to the area. “Lucy always wanted to be remembered for her comedy,” says Steve Neilans, one of the Festival organizers, “that was her vision for Jamestown.”

Lucille Ball was a trailblazer in the comedy world, being ahead of her time, and leaving a lasting impact on, not only the entertainment industry, but on the world. “Desi and Lucy made the comedy that we see today,” says Neilans, “if it wasn’t for them, we wouldn’t have re-runs, we wouldn’t have the three camera set up, and we wouldn’t have had “I Love Lucy.”

The Lucille Ball Comedy Festival has been a staple in the Jamestown community, so it would only be fitting that The National Comedy Center be opened there. “It isn’t a comedy hall of fame,” says Neilans, “its a place where the art of comedy can be celebrated.”

This 50 Million dollar project has renovated the former Jamestown Rail Station into a 37,000 square foot attraction. “Comedy is very personal,” says Neilans, “what you think is funny and what I think is funny might be two completely different things.”

The National Comedy Center will allow visitors to customize their own comedy experience. Visitors will be asked “what do you find funny?” and after the comedy profile is established, a customizable experience will be started.

The Center has also been in the news as of late for acquiring the archives of George Carlin and Shelly Berman, which will be on display for visitors.

The Center will open in August, and to celebrate, this year’s Lucille Ball Comedy Festival will be very special. Big names like Lily Tomlin, Amy Schumer, Dan Aykroyd, the original “Saturday Night Live cast members, and more are scheduled to attend. “This year we also have comedy showcases, where lesser known comics get to perform,” says Neilans, “and we have The Tropicana Room, which is a recreation of Ricky’s Manhattan Night Club. We also have comedy programming aimed for children where actors will take stories written by kids and will act them out. It is a full weekend of events. It is great for the area.”

Neil’s says that if you are interested in attending any of the events, you need to get your tickets early. “The tickets sell out quickly, so you should act fast.”