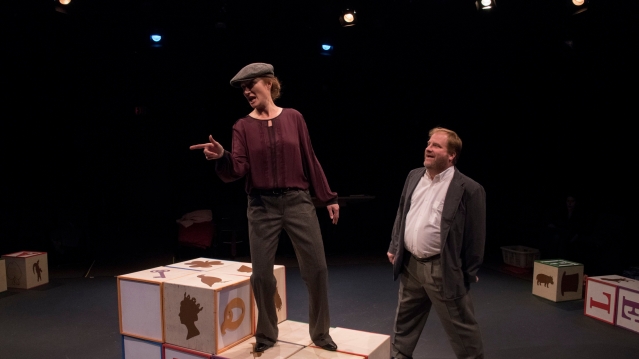 Maeve Binchy is one Ireland’s most beloved modern novelists. One of her early novels, “Circle of Friends”, was adapted for the silver screen (starring Minnie Driver and Chris O’Donnell) in 1995.  One of her last novels, “Minding Frankie,” (published in 2010, four years before her death) was adapted for the stage, and it will make its US premiere at the Irish Classical Theatre when it opens there on November 3.

Binchy’s novels are renowned for their warmth and charm, with a touch of well-placed wisdom woven into classic and gentle storytelling. Her books read like an Aran knit sweater: cozy, comfortable, maybe a little bit scratchy at times, but you always feel better about wrapping yourself in Binchy’s carefully written world.

For director Chris Kelly, he has the enviable task of crafting the work of playwright Shay Linehan with two venerable ICTC actors, Kristen Tripp Kelley and Christian Brandjes.  The play opened in Dublin earlier this year, and is now touring Ireland. As this was the US premiere, he says, “There aren’t many places or other productions to look in on, to see how others have dealt with the piece. Honestly though, by and large, it’s a really freeing position to be in.”

The original novel was 450 pages long: playwright Linehan “honors the spirit of the work,” says Kelly, in this 90 minute version, which allows it to become its own work, and not merely a segment of the longer piece. Kelly likes Linehan’s treatment, stating, “I think fans will be pleased with the adaptation and the great care we take with Binchy’s world and characters.”

The story is poignant: Noel is an alcoholic, and he unexpectedly becomes the “minder” of baby girl Frankie. His quirky family helps him care for the child, yet he still has to convince a disapproving social worker that this unconventional set up is in the baby’s best interest. Kelly cast Christian Brandjes and Kristen Tripp Kelley as Noel and Moira respectively, but they also portray a variety of other characters to illustrate the rest of Frankie’s extended family. Because they are both “earthy, honest, and versatile actors,” says Kelly, they bring their best to the wealth of characters in this story. Look for a production that’s lively, fun, and while it may be sentimental, there’s nothing wrong with that.

And millions of other Binchy fans around the world agree.

“Minding Frankie” is onstage from November 3-26, 2017 and is presented at Irish Classical Theatre. For more information, click here.