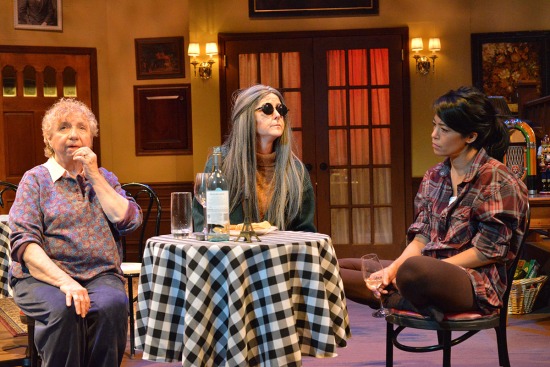 It’s funny how history can play tricks on you. Isn’t the past supposed to be static?  But if history is driven by the people who made the moments, do their spirits live on to remind you, change you, haunt you?

This cohesive meshing of story, set, and character make “John” a stand out.

This mystical mixture of the past and its influence on the present is center stage in “John,”  the season opener for Road Less Traveled Productions. In nearly three-hours and two intermissions, we’re focused on the world inside a charming bed and breakfast near Gettysburg, PA where travelers Elias (Adam Yellen) and Jenny (Sara Kow-Falcone) struggle with their relationship and heady issues of the day: her phone keeps pinging with texts; he chews his Fruit Loops too loudly; and they are in love but there are lies and truths giving them pause.

Mertis Katherine (“it’s my given name, but you can call me Kitty,” she says) is the lady of the house, winningly portrayed by the Darleen Pickering Hummert.  Kitty loves her home’s history and mystery. It was once a war hospital, you see, and amputations were quite common. Limbs were often stacked higher than the windows. Maybe that accounts for some of the strange happenings there. The orchestrion (think player piano with a mini tambourine and bells inside) that starts and stops on its own. The Christmas tree lights that blink on and off. The whooshing sounds of birds in flight. And the one small room that’s supposed to be off limits to guests. This place is her haven, where she memorizes bird facts, writes in her journal, and reads to her blind friend Genevieve (Priscilla Young Anker).

Playwright Annie Baker’s story peels off in layers that draw you in. While Elias spends hours touring Civil War sites, quirky Kitty and crusty Genevieve muse to Jenny about their pasts.  She tunes into their messages, like a student of life listening to two crones. But something strikes a chord. Genevieve’s ex-husband is named John (“But I called him Jack,” she says) and Jenny admits there’s a man in her past named John, too. “Everyone knows someone named John,” Genevieve sniffs dismissively.

It’s labeled as a comedy and while there are plenty of funny moments, Baker’s poignant dialogue (softened by well-timed pauses) is wistful and rich with thought. It’s a script that doesn’t answer all the questions it asks, but that’s what makes it so grand: you’re left to sort it out and linger in that deliciously provocative way that’s the essence of exceptional theatre.  This is the real deal.

Director David Oliver paces this show perfectly: you don’t feel the three hours at all. I couldn’t imagine a more suitable cast: Hummert as Kitty is both nurturing and strong; Anker’s Genevieve is salty and irascibly funny; Yellen plays Elias deftly with the perfect amount of chip on his shoulder ; and Kow-Falcone as Jenny is solid and a fine match for her character.

The true star is Dyan Burlinghame’s set and the well-designed lightening and sound designs by John Rickus and Katie Menke respectively. There are moments when the action is taking place offstage so your eye can linger on the set’s fine details. This cohesive meshing of story, set, and character make “John” a stand out.