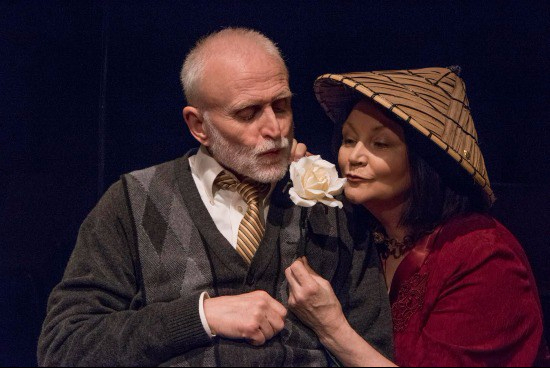 David Oliver as David Bliss and Josephine Hogan as Judith Bliss in ‘Hay Fever’ at Irish Classical Theatre.. Photo is by Gene Witkowski

Last night, I went to the Irish Classical Theatre Company and saw their production of “Hayfever” by Noel Coward. This British drawing room comedy from the 1920’s isn’t performed as often as Coward classics “Blithe Spirits”, “Private Lives”, and “Present Laughter,” and so being able to see “Hayfever” is a real treat.

The play takes place at a country house where Judith Bliss, a famous actress of a certain age, and her family and friends have assembled for a weekend. The Bliss clan is eccentric, Bohemian, and given to theatrics and this has a detrimental effect on the psyche of their unwitting guests.

Direction by Gordon McCall is spritely and smooth, and the pace is good. It could benefit by being a little wilder and more inspired – especially at the end of Act 3 – but this is certainly a pleasant production.

Josephine Hogan is the central character, Judith Bliss, and Ms. Hogan is very much in command of the proceedings, shining especially brightly as the emotional crux for the hijinks of the second act.

As her over-the-top daughter, Marisa Caruso, is appropriately both vivacious and arch, and she delights vocally with a range that can run from sultry to squeaky within the same sentence!

Ironically, the straight man played by David Lundy, gets the biggest laughs of the evening, and Jacob Albarella also scores as a hapless stage struck hunk.

Providing able support are David Oliver as the pompous novelist, Jordan Levin as his immature son, Hilary Walker as a notorious vamp, Melissa Levin as a ditzy flapper, and Andrea Gollhardt as the exasperated maid.

“Hay Fever” at the Irish Classical Theatre Company is light and fun and a lovely summer evening’s entertainment.

“Hay Fever” runs until June 25, 2017 and is presented at Irish Classical Theatre Company in Buffalo. For more information, click here.