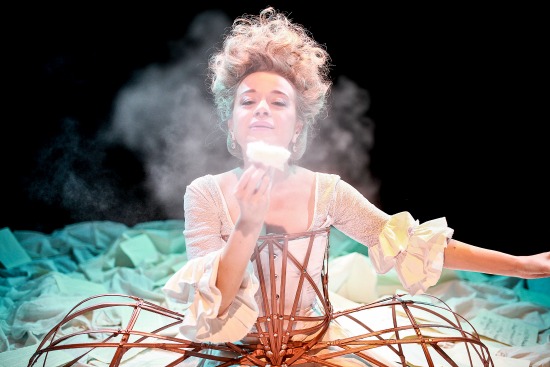 “Nobody saved my letters,” laments Nannerl Mozart, the older sister of Wolfgang Amadeus Mozart, or as she calls him, Woflie or “that little sh*t,” in Sylvia Milo’s one-woman show ‘The Other Mozart.’

This wistful statement delivered about halfway through the 80-minute performance could explain why Nannerl’s story is less told in music history. Eclipsed by her more famous baby brother, Nannerl also loved music, as she said, from the time she was born, and would clang her China tea cups in rhythm, and displayed prodigious talent at the keyboard. She badgered her father to teach her the harpsichord, which he delayed until her fingers grew longer and stronger (“perfect for the violin, but women can’t play the violin,” he told her). But then – like other show business siblings – Wolfie whimpered for lessons, too, to their father’s delight. At first the siblings toured with their father, and later Nannerl was left home, to learn the more womanly tasks like homemaking and embroidery. Being on the road like that, her mother feared, would make her too vain and unattractive to a potential husband.

Milo – the author and performer of this work –  created a very special world on stage to tell Nannerl’s story. The stark black stage has a single element: an enormous puddle of creamy looking silk – Nannerl’s dress – with letters and other trinkets from her life story tucked into the folds.  Milo appears in a very proper 18th century corset (a metaphor, perhaps, for the constraints on women’s lives back then) and steps into the center of this grand frock. As she tells her story, she picks items from her skirt – her first music lesson book, a tiny white keyboard – to advance her story in each careful gesture. Milo is expressive: her face, her gestures, every toss of her head and its bouncy, curly tuffs, convey something in her story. It’s an all sensory show, too.

Besides Milo’s monologue, with her clear voice rising and falling in delight and despair, snippets of music come and go, from Nannerl’s work,  brother’s, and Nannerl’s role model Viennese composer Marianna Martines. Milo’s husband Nathan Davis and composer Phyllis Chen composed other pieces, too, that replicate the clinking of silver teaspoons on tea cups, and tinkling bells and music boxes. There are subtle scents, too:  when she speaks of smelling lavender, Milo dusts the air with fragrant powder. The stage lights catch the sheer shimmery particles like a sheer veil as the gentle scent disperses. These moments give the show more of a performance-art feel than a straight stage play, and gives Nannerl a delicacy of spirit that transcends whatever regret or jealousy she may have about forsaking her musical gifts for a traditional marriage.

Milo’s text is rich and the stage devices – from the ornate prop-holding dress designed by Magdalena Dabrowska to Milo’s dramatic exit – contain some small (or expansive) insight into the life of an 18th century woman who – in another time – may have led a very different life.

This show is an interesting experience. Milo obviously did significant research on both the woman and this period in history. Often I felt her voice was overly strident which was a distraction from the impact of her words. To lift a phrase from the multi-Tony-award winning phenom ‘Hamilton,’ “who lives, who dies, who tells your story,’ Milo’s homage to Nannerl is worthy, and inspire reflection on how history treats those who don’t or can’t have a world spotlight on them.

Running Time: 80-minutes with no intermission.

“The Other Mozart” runs until May 7, 2017 and is presented at Shea’s 710 Theatre in Buffalo. For more information, click here.