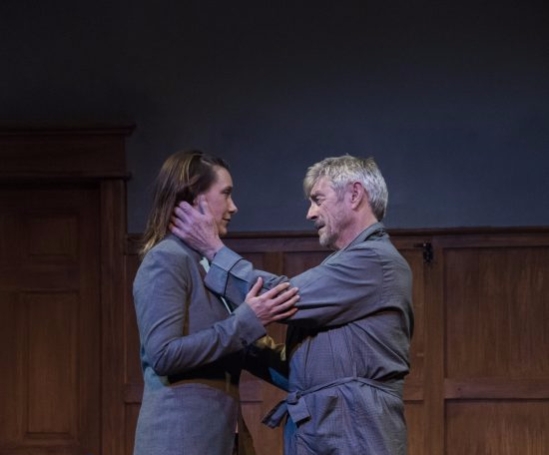 The cast of “The Father” at Kavinoky Theatre.

There are plenty of plays, films, books (fiction and non-fiction) about Alzheimer’s Disease or other forms of dementia. Playwright  Florian Zeller’s “The Father,” which he calls a tragic farce is different. Very different. Where other offerings may be touching or emotional or just very sad, “The Father” – through theatrical devices, characters and dialogue – evokes rich and raw substance. The secret sauce is its simplicity. It’s so simple that it will linger with you, longer than you think. That’s the essence of its brilliance.

David Lamb is extraordinary as Andre the father. He’s witty, he’s a flirt, he’s intense. And he’s withering. He’s convinced his caregiver is stealing his watch (a metaphor for time, perhaps), he’s critical of the caregiver’s laugh. Of course he doesn’t feel that he needs her. At least that’s what he tells his daughter Anne, beautifully played by Aleks Malejs. But Anne has her own life and she’s unwilling to leave her father without support. Until the scene shifts and someone else was in the door, saying she’s his daughter, with a different husband. And said husband disappears with groceries that are never made into a meal. And Anne is back, while her father laments – finally – that he feels that he’s “losing his leaves.”  That’s the most frightening part of this disease: there are points when you know you’re fading, and other times when you’re completely convinced you’re fine, and who are these people around you?

Malejs (last seen at The Kavinoky in the magnificent one-person show ‘Grounded’) is strong as Anne, concerned, caring, sad, and unwavering.  Adriano Gatto and Christopher Evans are the two other men of the show, who may or may not be Anne’s husbands. Gatto’s measured indifference to Andre’s needs in one moment is almost chilling, but perhaps that’s the way a frustrated, confused spouse-in-law may act when sharing a home with someone whose life is evolving. In smaller but significant roles are Kristin Bentley and Jenn Stafford, as caregiver Laura and and daughter/healthcare provider respectively.

The elegance of this staging is…the stage itself. David King’s stunning, versatile set diminishes in scope as Andre’s cognition wanes.  Hard blackouts allow the scenes to change and those soft-lit patterns above center stage is Andre’s gray matter, shifting, shrinking, tangling, leaving him. The actors move through these changes gracefully. Director Robert Waterhouse’s careful attention to the smallest details and nuances is pristine and remarkable.

In the end, it’s Lamb’s show. Watching his expressions, his language, his being close in on itself is heartbreaking. The ultimate scene, as Stafford and Lamb communicate one last time, will make you catch your breath. Don’t look away.

“The Father” runs until May 14, 2017 and is presented at The Kavinoky Theatre in Buffalo. For more information, click here.

Tagged as: The Father, The Kavinoky Theatre