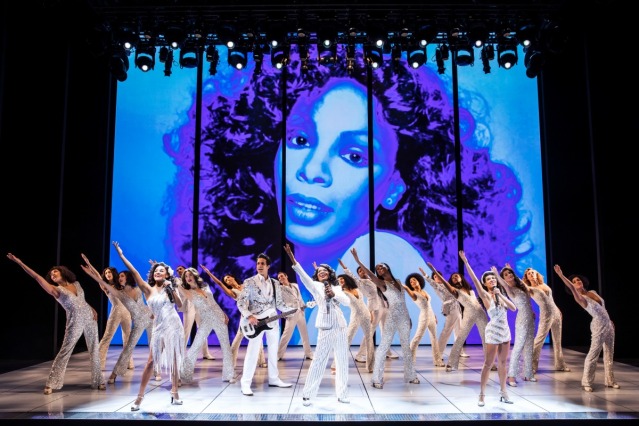 The cast of “Summer : The Donna Summer Musical.” Photo by Matthew Murphy.

“Summer: The Donna Summer Musical”, which began its national tour in Rochester, NY this week, starts out with a diva-level performance and a bass beat that you feel in your heart. The opening number, “The Queen is Back”, promises that this is going to be a hard-driving performance—but changes gears to be much more subtle through the middle and then changes back again at end.

The show follows the footprint of jukebox musicals such as “Beautiful: The Carol King Story”, and “Mama Mia” which use the star’s portfolio of hit songs to tell the story of their life. “Summer” takes the audience through Donna’s childhood in the 50’s which were grounded by a loving family and church; her early career in the 70’s where she had a ground floor seat creating the disco genre with songs like “Love to Love You Baby” and “MacArthur Park”; and culminating in her diva years when she develops the strength to take better control of her career and her life. The part of Donna Summer is played by three actresses—one for her childhood (Olivia Elease Hardy), one for her mid-career (Alex Hairston) and one for her diva years (Dan’yelle Williamson). There were scenes in which the director craftily put multiple Donnas on stage to sing duets and trios together. All three actresses had powerful voices that filled the Auditorium Theatre to its dome but it was diva Donna, and her powerful command of her instrument, who was arguably most reminiscent of Donna Summer.

The emphasis on Donna’s irritation at being associated with her first hit, “Love to Love You Baby,” and being known as the “Queen of Disco”—as she shot up the charts and began to live a life in luxury—seemed a bit hollow. On the other hand, the treatment given to Donna’s childhood sexual abuse at the hands of a church member, mid-life physical abused by her first husband, and the devastating mishandling of her finances seemed to deserve more gravitas than was given. There was a very brief mea culpa moment in the show that revisited anti-gay statements made by Donna during a performance in 1983 that garnered strong public backlash. This incident was actually a protracted story at the time that stained the icon’s image, especially among some of her biggest fans in the gay community. The story also included little-known or forgotten tid-bits about the star’s life like when her managers originally wanted to have Cher record “Bad Girls” and Donna’s lukewarm attempt at acting in “Thank God it’s Friday”.

The vocals, disco-funk music (Music Director, Amanda Morton) choreography (Choreographer, Sergio Trujillo), and costumes (Costume Designer, Paul Tazewell) will thrill any Donna Summer fan. The final two numbers, “Hot Stuff” and “Last Dance” sent the audience out the doors dancing and singing their way to their cars (I know I wasn’t the only one).

Run Time: 1 hour and 45 minutes with no intermission