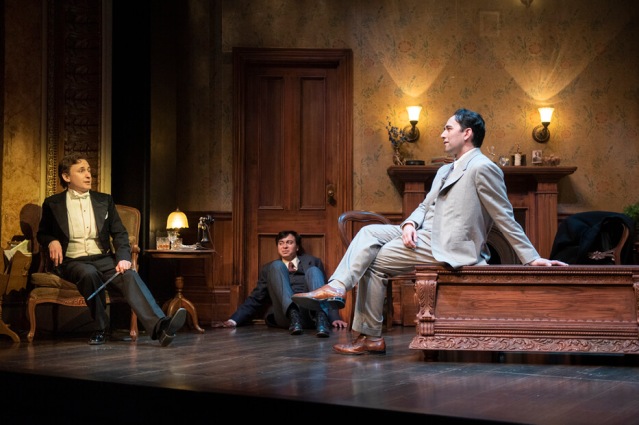 The cast of “Rope” at The Shaw Festival. Photo by Emily Cooper.

“Rope,”  on stage at the Shaw Festival’s Royal George Theatre, is a not-so-classic  whodunit where you know who the killers are from the opening moments of the story. What you don’t know is who from their inner circle will figure it out, or how long it will take for the killers to crack. Cue the theatrical suspense.

. . .the staging and art of presentation of ‘ Rope’ is pure stage magic.

Penned by playwright Patrick Hamilton, ‘Rope’ preceded his more renowned play ‘Gaslight’ by 10 years, debuting in London in 1929. This timing makes it a perfect fit for this gem of a theatre. Designer Joanna Yu’s period-perfect set is the epitome of British society of the day. It’s something of a metaphor, too:  simple elegance can successfully hide something that’s dreadfully disturbing. The set pieces deserve credit for taking on character roles themselves: the grandfather clock is the larger than life presence that marks the passage of time. The bar table that exposes and conceals elixirs is there to draw out truths. The center-stage wooden chest is both the table and ersatz coffin. And together it just looks so darn pretty at first blush.

The story opens just after the crime is committed. University pals (or are they lovers?) Wyndham Brandon (Kelly Wong) and Charles Granillo (Travis Seetoo) have just killed one of their school chums. No real reason, other than they feel strong to his weakness, affluent to his common, and heck, they had nothing better to do. Another stage metaphor: the first 10 minutes of the show are very dark, with only the flicker of their lit cigarettes and quick flashes of table lamps to punctuate the dark. When finally convinced to let there be light, Brandon announces, “ I have committed murder. I have committed passionless – motiveless – faultless – and clueless murder. Bloodless and noiseless murder … And immaculate murder. I have killed. I have killed for the sake of danger and for the sake of killing. And I am alive. Truly and wonderfully alive. “ Granillo or Granno as he is called, is the less willing accomplice (could he have been a potential victim?) and is nervous and not proud. When he neglects to hide the deceased’s theatre ticket, Brandon reminds him of his place when he tells him, “It’s your business to see what I don’t see.”  Well, every Batman needs a Robin as they sang in “The Book of Mormon.”

The duo then hosts a party – with the deceased still in the wooden chest – with more university chums and even the deceased’s aged father. The coffin-cum-buffet is neatly covered with linen and snacks as the bon mots fly between veiled threats, some grandstanding, where the roots of suspicion are revealed. It’s university prof Rupert Cadell (Michael Therriault) whose suspicions are aroused as the others drink and banter around him. Therriault plays this role with a delicious detachment, almost like the observer who waits for the right moment to insert himself in the moment. He’s the one to watch in the ensemble.  I’m not completely convinced with actors Wong and Seeto as recent university grads, but casting Therriault in this creepy “guest who won’t leave” role is fine.

There were up and down moments throughout: the costuming was stunning. The fight scene was almost too balletic. There was some suspense, but not enough real tension. Granno’s fear was almost comedic and nervously jerky.

While the plot may be implausible, the staging and art of presentation of ‘ Rope’ is pure stage magic. Louise Guinand’s lighting design is meticulous: the near dark sequence may have felt a bit too long, but the effect was stunning. So was the constant rain patter and splatter on the window. Director Jani Lauzon kept the action fluid and well-paced. She used the backlit stairway well as a point of transition and a good visual device. Composer/sound designer John Gzowski (good to note  that this was a woman-dominated production team) laid down a subtle and constant music bed that was just ‘there’ enough to connect you to the characters and their machinations. When the story fails me, it’s these elements that pull me in.

‘Rope’ is a visually beautiful production that hides a seamy story of murder and deception. It’s onstage on a rotating schedule until October. 12. It runs two hours with a 10-minute intermission. Visit www.shawfest.com for details and tickets.

Tagged as: Rope, The Shaw Festival