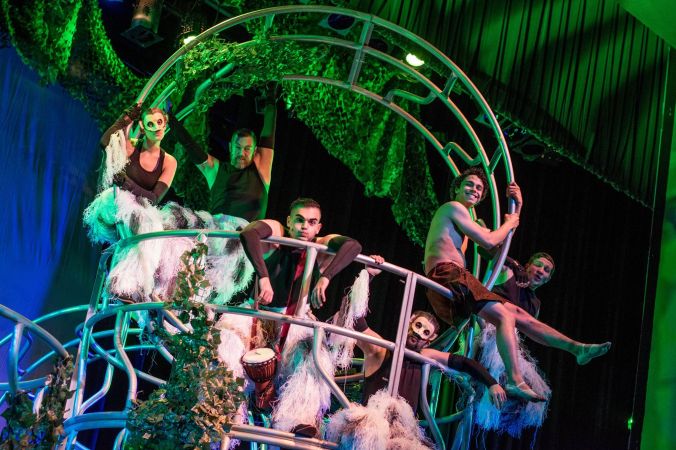 The cast of “The Jungle Book” at Theatre of Youth.

On a cold and blustery March day a little time in a jungle seems a welcome and warm idea.  But it’s the nature of things to have their ups and downs, and we’re not just talking about monkeys climbing here.

The ups are many and, yes, the monkeys are one of them.  But start that with a beautiful, richly lit set, the comfort and warmth of Allendale Theater, a story appropriate backdrop and lush projections adorning the theatre walls and ceiling.  You’re ready to be warmed by this tale of the boy, Mowgli, raised by wolves in the jungle whose coming of age is threatened by some of the very creatures of that jungle and his own precocious nature.

The warmth continues as some of the actors come out into the audience and engage both children and adults in the experience of what is about to take place.  It all holds a lot of promise to be a great experience for both young and old.

In costumes narrowly suggesting wolves, monkeys, vultures, the tiger, Shere Khan, a panther, Baghera, and Baloo the bear, there are five actors taking up these roles, and they come at it with eagerness, enthusiasm and, at times, certain gusto.  All five play multiple characters, switching out at a moment’s notice several times during the play. And when all five of them are on stage at the same time, interacting as animals in and out of the spotlight, the production shines. And later, when all five are on stage, playing the troupe of monkeys it is, well, a full-on monkeyshine of a time.

This is a fun, visually striking, rhythmic, musical, sometimes acrobatic-like production.  And it’s an often hilarious romp through the jungle, where a few performances stand out. Lissette DeJesus plays one of the rollicking monkeys to the hilt in a couple of scenes with her ape-like brethren, and brings a slithering, deceptively charming light to Kaa, the mesmerizing snake who holds the jungle creatures and audience in her hypnotic gaze.  DeJesus is an ensemble member of the Raices Theatre Company and currently a Theatre major at Buffalo State. And she looks to be a promising and more prominent fixture in Buffalo, if not beyond Buffalo theatre, after her studies are completed.

Also standing tall in the jungle-gym — a rotating set of  giant hoop-like steel structures (constructed of farming bale feeders) that are adorned with foliage – are monkey/vulture actors Brendan Didio and Rick Lattimer.  While it’s true the monkeys steal the show for a time, Didio and Lattimer’s double duty as vultures have the most charismatic and cleverly comical roles. Plus, their vocal ranges, going from land to air creatures, give one the idea that there are more actors playing these roles than there really are.

It’s hard to say what the intended audience, children, might take away from this story.  Kipling’s tale is about many things – a dangerous world of the jungle in which the creatures kill one another, one in which  Mowgli must be and is taught the ways of the jungle in order to coexist. And ultimately whether it is best the “mancub” leaves the jungle when he becomes older and more man-like.  On one hand Kipling’s tale is complex but magical, while cartoon and film renditions tend to fun and musical. But in either version, the message is clear.

This stage version, written by Greg Banks, seems to fall somewhere in between, and in doing so loses some footing.  It’s incredibly fast-paced, never pausing, jumping through and past the lessons of Mowgli’s journey, and what it means for him to understand and coexist with nature.  Lost in the hustle are some of the meaningful exchanges of this story, some heartfelt moments in which Mowgli is made to understand his own journey, some time to take in how one thing that happens leads to another.  Some intention of the story seems lost in its breakneck pace.

But what’s the worst thing that could come of that.  Beyond the questions kids ask – how did you do this, and how was that made – they may be moved to ask, why did this happen, or why did that happen. They’ll be given a chance to ask after the play.  Or maybe they will be moved to ask that of their parents. Either way, with this visually stunning, inventive and creative production, TOY has yet again created an opportunity to engage kids and adults in theatre and performing arts.  And if kids in attendance leave with just that, then Meg Quinn and company can call it mission accomplished and well done.

“The Jungle Book” runs through April 7, 2019 and is presented at Theatre Of Youth.  For more information, click here.