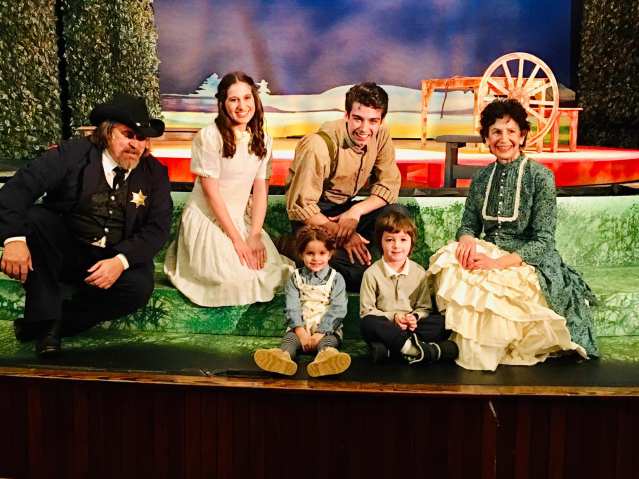 The cast of “Tuck Everlasting” at Theatre of Youth.

Theatre of Youth is presenting “Tuck Everlasting,” based on the award winning children’s book by Natalie Babbitt. In addition to the novel and this play version, “Tuck Everlasting” has also been made into a musical and two feature films, the first of which was directed by Buffalo’s Frederick King Keller and featured WNY actors Joey Giambra, Barbara Harmon, Ron Swick, and Fred A. Keller. This was the film that launched Keller’s distinguished film and television directing career.

The story is a fantasy about Winnie, a young girl who discovers both a secret magical spring of water and a mysterious family who live in the nearby woods. The Tuck family, unwittingly, drank from the spring long ago, and the water has given them eternal life. Apparently, in all the years that this spring has been in the woods, the Tucks are the only people who ever thought to take a drink from it! Winnie, who is an overly protected child longing for adventure beyond the gates of her house, is thrilled to finally have friends, the Tucks, and so she promises to help them keep their secret about the water.

I remember enjoying the Keller film version of “Tuck Eveberlasting” and thinking that the story was strange but charming. The screenplay was written by Keller and the book’s author, Natalie Babbitt. The storyline in the TOY production, however, seemed oddly disjointed, and so I went home and got onto Youtube and revisited the film where I discovered that they are lots of scenes in the story that have been left out of this play adaptation by Mark J. Frattaroli. This truncated version of the plot doesn’t give us enough opportunity to understand how lonely Winnie is and why she is thrilled to be accepted into the Tuck family.

Since the importance to Winnie of her burgeoning friendship with the Tuck family is such an integral part of the plot, I wish director Meg Quinn had made more of those moments of closeness and love. When Mr. Tuck kisses Winnie on the head and when Mrs. Tuck tucks (!) Winnie into bed, we should see how meaningful these actions are to the isolated young girl. Instead, in this production, these moments are somewhat casual, and it’s a bit of a surprise when Winnie later talks about how much she has come to love the Tuck family and when she volunteers to put herself in danger to help them.

In the central role of Winnie, Sabrina Kahwaty exhibits youthful exuberance. Sound is a challenge in this large venue, but Ms. Kahwaty’s diction is clear and her volume is the best in the production.

Priscilla Young is earnest as the good-hearted Mrs. Tuck. I would have liked Steve Vaughn to have done more with Ms. Young’s big fight scene. It was over in a flash and, from where I was sitting, it looked like the butt of the gun just brushed the villain’s flesh. I was surprised that this slight action knocked him to the ground and amazed that he died from this little tap!

Zachary Bellus has good energy as Mrs. Tuck’s younger son, and Nick Stevens, one of the best young actors in town, is also fine as the older son. Mr. Stevens has one big scene where he is trout fishing — although, if he catches one, he will, inexplicably, have to stuff it into a tiny toy bucket! Mr. Stevens does a nice job with the scene; he has a pleasant and natural style.

Sets and costumes by Kenneth Shaw are lovely, especially a woodland watercolor with an orange sky. Original music by Chester Popiolkowski is charming, and I wished there was more of it. I would have much preferred musical interludes between scenes to the incessant droning tape recorded narration. The lighting by Todd Proffitt is also good, and the full moon effect on the wall of the theatre is very special.

The biggest challenge with this production is the adaptation which is short on both humor and action and long on stilted dialogue and philosophic whimsy. I would recommend this production for ages 12 and over. The younger children in the audience started whispering and squirming about halfway through the show.

“Tuck Everlasting” runs 90 minutes, and there is no intermission.

“Tuck Everlasting” closed on February 10, 2019. Up next,  “The Jungle Book” in March/April and “Dragons Love Tacos” in May. TOY is also registering for their new student workshops running in February through May. For more information, click here.