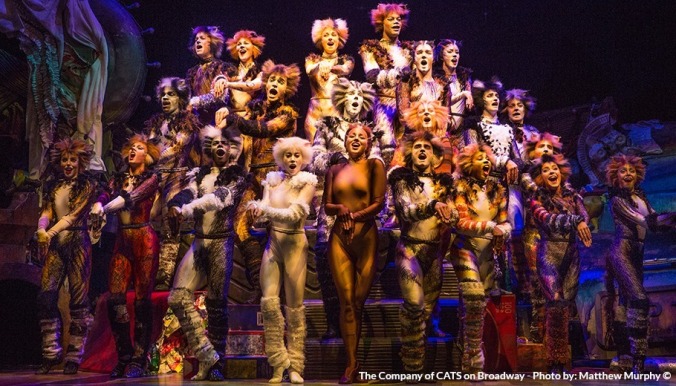 The Broadway Cast of “Cats.” Photo by Michael Murphy.

“Cats” is a musical like no other. After it opened in 1982, it was the longest-running Broadway show in history from 1997 to 2006, entertaining generations of theatergoers with a synthesized 1980s score and yards of spandex and fur. When it returned to Broadway nearly a decade after it closed in 2016 with updated choreography and orchestrations, it was, similar to one of the Jellicle cats in the show, completely reborn. Thankfully, that production has arrived in Buffalo and whether you’ve never seen “Cats” or seen it 20 times, it is not to be missed.

“…the triple-threat ensemble is jaw-dropping…”

Based on “Old Possum’s Book of Practical Cats” by T.S. Eliot with music by Andrew Lloyd Webber, the audience is personally greeted by a band of various Jellicle cats (especially if you sit downstairs), who are gathering in anticipation of the annual Jellicle Ball, where one lucky cat is chosen by Old Deuteronomy to be reborn to a new life and travel to the Heavyside layer. The show then breaks into incredible dance numbers introducing the various cats, their personalities and what they do all day.

Sure, the plot isn’t Pulitzer-winning, but it honestly doesn’t matter thanks to the outstanding singing and dancing talents of the ensemble. They perform endless dance numbers with some of the hardest choreography in show business, leaping weightlessly around the stage.

One of the most controversial changes to the new production was Andy Blankenbuehler’s choreography. Gillian Lynne, who regularly collaborated with Lloyd Webber and is responsible for the taxing and beautiful lyrical ballet that dominated a majority of the show, did not hide her anger at the updates. Before you worry that this isn’t the “Cats” we all know and love, I’m here to assure you that it is, but it is also much, much better.

Lynne’s iconic ballet sequences, leg extensions and cat-like clawing are still very present throughout most of the show and is performed flawlessly by the cast. Blankenbuehler’s additions completely woke up the show, updating a thrilling tap number with Jennyanydots (Emily Jeanne Phillips) and incorporating more modern styles into various numbers including Rum Tum Tugger (an outstanding McGee Maddox) and Magical Mister Mistoffoles (a joyful Tion Gaston). Fans of “Hamilton” will be able to spot Blankenbuehler’s additions, which exhibit more precision and funk than the strictly ballet portions. It is a dancer’s dream to watch and gives a show often misconstrued as old and tired a refreshing facelift.

The dancing is the main draw of “Cats,” and rightfully so, but this is also one of the most vocally strong ensembles I’ve ever heard to tackle this score. As if it wasn’t enough to continually dance for two hours, the various actors are also tasked with tongue-twisting phrases and eight-part harmony that they belt out with ease. A great example of this is Tony d’Alelio and Rose Iannaccone as Mungojerrie and Rumpleteazer, two cat burglars with a penchant for cartwheels and acrobatics. Iannaccone notably gets a note out as she’s tumbling, an impressive feat to say the least.

On opening night, I heard some odd laughs and murmurs in the audience, with some indicating that they show was not their cup of tea. All of that was silenced the moment Grizabella (a jaw-dropping Keri René Fuller) began to sing the iconic “Memory.” She sang with strength and desperation, even inspiring an extended applause break following the reprise. That performance alone is worth a trip to the theater.

This production will make “Cats” has come alive for a whole new generation. The triple-threat ensemble is jaw-dropping, performing stunning choreography without flaws or hesitation. Whether the show is new to you or one of your favorites, it is not to be missed.

Running time: 2 hours and 20 minutes including a 15-minute intermission.

“Cats” runs until February 10, 2019 and is presented at Shea’s Buffalo Theatre. For more information, click here.