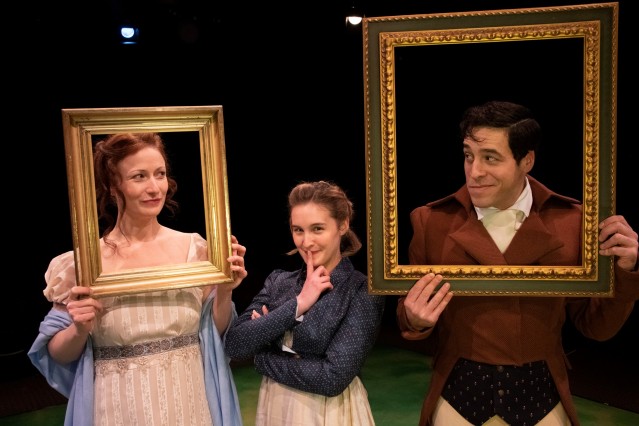 Gossipy, back-biting, smugly superior…yup, sounds like life in the British countryside, late 18th century style. This was the proverbial fodder for Jane Austen’s mill.  Kind hearted sisters stripped of their place in society, weak-willed men who don’t deserve them, and lots of smart, witty repartee make Austen’s novels a divine read and a delight on screen. Playwright Kate Hamill took the best of what we love about Austen’s “Sense and Sensibility” and Irish Classical Theatre Company put it on stage in its WNY premiere.

The opening scene is reminiscent of the ‘Tower of Babel’ opening of “Godspell” and ‘The Telephone Hour’ from “Bye Bye Birdie,” but instead of dishing about Hugo and Kim, we’re introduced to the Dashwood sisters and the fate they’ll suffer because of their father’s death and their half-sister-in-law’s machinations. Hang on to your reticule, things are about to start spinning. Literally. The white-painted set pieces are on wheels and besides delivering Miss Austen’s good words, the actors are constantly moving, circling, scooting about on either tables, chairs, benches or mobilizing them. Then there are gilt frames that magically appear at propitious times, sometimes as cottage windows or carriage windows or other portals of adventure. And don’t be confused when actors flip into multiple roles which include prancing horses and rambunctious dogs. Anthony Alcocer’s one sleeve on/one sleeve off over the shoulder dual role is particularly charming.

The cast is clearly enjoying this romp and roll, too. Kristen Tripp Kelly and Renee Landrigan embrace their roles as Elinor and Marianne Dashwood, the sense and sensibility of the title respectively.  They are everything a Dashwood daughter should be: Elinor is the pragmatic one who delivers the best Jane line of the novel: “I am calm. I am my own mistress.” Landrigan is the perfect Marianne, collapsing for wont of honor and true love in one scene, and playing a mean air pianoforte in several other scenes. Listen to the music and watch her fingers: she’s really playing along with the music. Impressive.

While the rest of the cast don multiple roles, they are the constants. At time their mom is Jennifer Stafford and younger sister Margaret is winsomely played by Brittany Bassett in her ICTC debut. Kate LoConti Alcocer is despicable as Fanny Ferrars Dashwood. Josephine Hogan embraces her role as the supportive Mrs. Jennings. The menfolk of the ensemble have some of the best moments. David Lundy’s main role is John Middleton, and yes, that’s him again donning a lace shawl in other moments. Ben Michael Moran plays it all from Edward Ferrars to one proud stallion and frisky pup. Brendan Didio is John Willoughby, another ICTC debut.

When they aren’t rolling chairs and tables across stage, the troupe is the soundtrack, too. From perfectly choreographed finger snaps, thigh slaps, and palm rubbing form thunderstorms. A burst of pop tune sets a new scene, repetitive words – like chants – create the metaphoric inner turmoil. Director Kelly wrung every bit of energy from this cast for sure.

The pace on stage was constant motion, fresh and bright. If the first act dragged a bit, blame dear Miss Austen’s original script for wanting to pack in every detail where a modern author would have settled for more nuance.

“Sense and Sensibility” is onstage until February 10. For more information, click here.