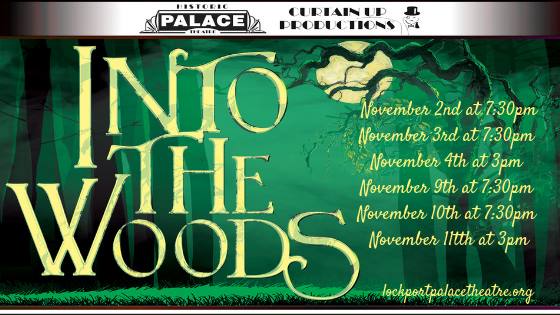 “Into the Woods” was thrust back into the cultural spotlight with the 2014 feature film starring a colorful cast of Hollywood and Broadway performers. It weaves numerous fairy tales into one flowing narrative, an emotional roller coaster. Lockport Palace Theatre, taking a step forward in their own story with a beautiful internal restoration and remodeling, presents the Sondheim classic with a well-staged and comprehensive production.

. . .[an] efficient and successful production.

“Into the Woods” only works when there are no weak links, when the entire ensemble is strong. The Palace has assembled an extremely capable cast, made up almost entirely of Palace regulars. Serving as the story’s Narrator, Jon May takes the audience along for a ride into the fairy tale world, aided by an unbelievable set design. May understands the nuances of the comedy and has the audience in the palm of his hand from the first chord. The story centers around the Baker (Bobby Cooke), the Baker’s Wife (Kelly Ersing), Jack (Zach Thomas), Little Red (Rheanna Gallego), and Cinderella (Emily Prucha). All these primary characters must travel into the woods in search of something. In the Baker and his wife’s case, to reverse a spell placed on their family by the next-door Witch (Taylor Carlson) that has kept them childless. The story evolves from here, detailing triumphs and tribulations in the journey of these main characters.

As the Baker and Baker’s Wife, Cook and Ersing are a perfect pair. Cooke has an indescribable charm in this role and brings an honest and organic portrayal to the character; we believe he will do anything to get a child, and yet he puts the feelings of others before himself, even when it means sacrificing a necessary item to lift their curse. The role sits right in his vocal range and makes for wonderful renditions of the Sondheim score. He is particularly good in his Act Two “No More.” Ersing is his match in every way. She is a stellar singer and can handle the serious moments too; her “Moments in the Woods” is a master class. Thomas handles Jack’s naivety well, without creating a caricature, and is a capable singer to boot. Gallego is perfect for the role of Little Red, she manages to play both the “sour” and “sweet” of the storybook child who loves to snack. Gallego brings depth to the character from the get-go, which is uncommon in most portrayals. Finally, Prucha’s Cinderella channels more Anna Kendrick (film) than Kim Crosby (Original Broadway); she’s a modern woman for sure. In this performance, I felt Prucha took a few scenes to warm up to her usual sharpness, but her Act Two was extremely strong. She’s off to get her wish and ends up marrying the less than charming Prince (Ricky Needham). He and his brother (Jackson DiGiacomo) are the stereotypical spoiled princes, but Needham especially brings humanity to the Prince. He is to be commended, as this is no easy task; the audience is supposed to dislike the Prince in Act Two, but Needham at least creates understanding.

Though all these performances are strong, the real standout of the evening is Taylor Carlson. She’s had terrific performances at the Palace before, but this one transcends even her normal successes. Everything is well rehearsed, tight, and executed almost flawlessly. She is an unbelievable vocal powerhouse, but she possesses a subtlety in this role I’ve not seen in her work before. This is clearly a dream role for her, and she plays it with a dream-like quality. It’s worth the price of admission itself.

“Into the Woods” is a wonderful piece of theater that is very difficult to execute with absolute perfection. My only complaint with the Palace production is one I can potentially attribute to only being two performances in. I felt like the pit was below performance quality; I heard frequent mistakes and jumbled tempos, which affected the actors onstage in turn. This was a small blip in an otherwise efficient and successful production.

“Into The Woods” runs untilNovember 11, 2018 and is presented at The Lockport Palace Theatre. For more information, click here.