Theatre Review: ‘And Where Will You Put The Things You Save?” by Inclusive Theatre of WNY at Alleyway Theatre 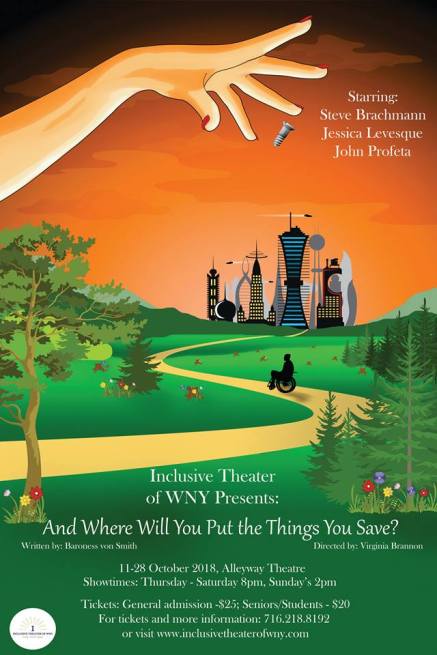 We say it so much it’s become a regional cliché, but here it is one more time. Western New York is truly blessed to have such a robust and vibrant theatre community. With a couple dozen professional theatres, several community theatres, and college and high school programs that are launching the next generation of theatre professionals, the local theatre scene has something for everyone. The latest company on this august list, Inclusive Theater of WNY, is doing its part by creating a company that welcomes disabled and abled actors and behind the scenes personnel to participate.

ITWNY is off to a fine start with this three-hander. . .

After two years of writing groups, workshops, and informal work. ITWNY opened its first fully staged production, “And Where Will You Put the Things You Save?” at Alleyway Theatre. This is a regional premiere by local playwright Baroness von Smith, a 2008 Artie Award nominee.

ITWNY is off to a fine start with this three-hander, featuring John Profeta, Steve Brachmann, and Jessica Levesque, directed by Virginia Bannon. Brachmann is Nick, an attorney whose career was sidelined as the result of a motorcycle accident and now uses wheelchair. Profeta, fresh off his role in Subversive Theatre’s production of “Fahrenheit 451” is his fiancée, an academic and a self-proclaimed tree-hugger with a deep commitment to protecting the environment. Jessica Levesque is Ericka, Nick’s younger sister, an aspiring roller derby skater who is on the autism spectrum. The story emerges as all three characters find themselves challenged by life-changing crossroads. Nick cautions Alex about his environmental passion heading to the extreme. Ericka is eager to explore friendships and experiences beyond the confines of a group home. Alex struggles with his visions for an idyllic world unmarred by technology’s interventions. Their commonality: they just want to find happiness and acceptance in a less-than-tolerant society.

Bannon’s straight-forward direction makes perfect sense for this first-time cast. She coaxes a lovely debut performance from Jessica Levesque, whose character is bubbly one minute, and stressed and anxious the next as she experiences a bigger world with acquaintances who don’t understand autism. This was also Brachmann’s debut. His chemistry with his castmates took some time to be convincing while his posture and demeanor as a wheelchair bound man was elegant and real. Profeta was solid throughout, an anchor in the lives of two disparate siblings who are finding new ways to navigate through their worlds.

The company’s founder Aimee Levesque was aware of the script for a while, and was at first hesitant to plan it as the company’s first production. She felt that with two characters disclosing  their disabilities as defining elements of the story was too obvious. Together with her associate founder Marilyn Erentsen-Scott they determined that the subtle and not so subtle messages of von Smith’s intriguing story made a positive statement about the company’s mission to reimagine our society without the disabling barriers.

There were a few opening night glitches: a set piece that wasn’t supposed to break, a few stalled lines, some ambient music that was too loud and long. Overall, it was a great effort and a production that is worthy of a larger audience.

It’s important to remember that this is a first-time production for a fledgling company that was founded to give every and any person with theatrical interests a place to work hard and to shine. Local actors, directors, and other theatre professionals have lent their time and talent to help this group fulfill its mission. It’s laudable and important work. Not every show is Broadway bound, nor is every local production, actor, director, or stage crew expecting to be. But that’s what makes the rich tapestry of our theatre community so special. There’s a stage and an audience available, accessible, and welcoming for everyone, without the pretense of lofty expectations. Smaller, new companies need the same support and attention as their well-heeled peers. This production is worth seeing and supporting.

“And Where Will You Put The Things You Save?” will run to October 28, at the Alleyway Theatre. For tickets, call the box office at 716-218-8129, and for more information on the production and the company, visit www.inclusivetheaterofwny.com.

Tagged as: Alleyway Theatre, And Where Will You Put The Things You Save, Inclusive Theatre of WNY