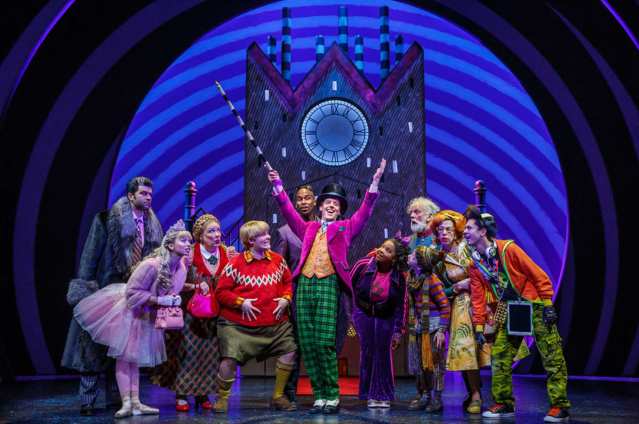 The Original Broadway Cast of “Charlie and the Chocolate Factory.”

Chocolate, Oompa Loompas, golden tickets, factories, dreams, and big imagination are all present in the brand new touring production of “Charlie and the Chocolate Factory” which officially opened at Shea’s Buffalo Theatre on September 25. Excitement filled the air in the theatre as the lights dimmed, the orchestra roared, and the tale of Willy Wonka’s chocolate factory came to life before our very eyes. This show is truly confectionary magic.

. . .confectionary magic. . .this sweet production will be melting the hearts of audiences all over America.

“Charlie and the Chocolate Factory” is a musical that is based on the children’s novel by Roald Dahl, and the film starring Gene Wilder. The creative team reimagined the show, originally produced on London’s West End and directed by Sam Mendes in 2013. Upon it’s Broadway transfer, the show was altered for Broadway audiences and not only includes new original songs by Marc Shaiman and Scott Wittman, but also includes some songs by Leslie Bricusse and Anthony Newley that were featured in the Wilder film.

This show hits all the major story points that audiences will know from the book and the film adaptations. Charlie Bucket (Henry Boshart) is a poor boy who lives with his mother and grandparents. He is fascinated with the mysterious chocolate factory that is located in his town, and obsesses over how to get to see inside it. One day he notices that a new Wonka candy bar franchise has opened in his neighborhood, and when he enters, he befriends the shopkeeper. The Shopkeeper is Willy Wonka (Noah Weisberg) in disguise, and he is looking to find his new replacement to take over the factory. He places five golden tickets in his candy bars and the world explodes, looking for the chance to enter the factory.

Some of the high points in the production are the introductions to all of the other children who find the golden tickets, played in this production by adults. “More of Him To Love” the introduction to Augustus Gloop is one of the funniest things I have seen in years. I laughed so hard that I could barely breathe.  Not to be outdone, Mike Teevee’s introduction in the song “That Little Man Of Mine” is the definition of hilarity. The performance is so subtle that you have to listen closely so you will hear all the genius one liners that really make the song entertaining.

Mark Thompson’s scenic and costume design are wonderful, and they keep the magic alive and well throughout the entire production. Paired with Jeff Sugg’s projection design, the two design elements complement each other nicely and add to the overall experience. The chocolate room, the Bucket house, the candy store, and all the other sets effortless work hand in hand to seamlessly tell this magical story.

Basil Twist’s puppet design in the show is spectacular. That is all I will say. I don’t want to give away the surprise.

Leading the show as the “Candy Man” is Noah Weisberg. Weisberg is a real song and dance man. He performs well, and has a fun presence on stage, yet he makes a character that we all know, unique. His strong point is in the best song of the show, “It Must Be Believed To Be Seen.” He ends the first act on a high note, and his energy travels into act two where all the hi jinx take place.

Henry Boshart is fantastic as Charlie. The level of professionalism that this young man has is stellar and his stage presence and persona are great. He takes to the stage and as the only child performer in the show, deserves to be there. He sings incredibly well, and does not disappoint.

James Young is the perfect choice for Grandpa Joe. He brings a comedic flare to the role that is unique and entertaining. He has such a young spirit and is full of energy, even though he is portraying a ninety year old man.

The ensemble backs up these wonderful actors, and there is not one person on stage that does not deserve to be there. I think I can say with great confidence that this sweet production will be melting the hearts of audiences all over America. Go see this show!

“Charlie and the Chocolate Factory” runs until September 29, 2018 and is presented at Shea’s Buffalo Theatre. For more information, click here.