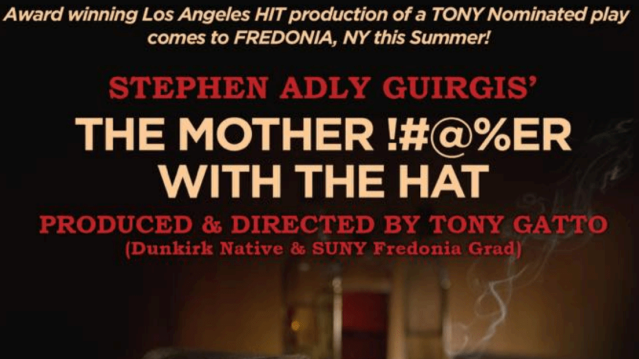 Co-Producers Fayna Sanchez and Tony Gatto team up again to announce the official east-coast premiere of their long- running hit & award winning BEST OF 2017 HOLYWOOD FRINGE production of “The Mother****er With The Hat” Friday August 3rd and Saturday August 4th at 8pm Bartlett Theater in the Rockefeller Arts Building/SUNY Fredonia Campus, 280 Central Ave, Fredonia, NY 14063 Tickets are $30 each OR 2 or $25 each. Click here for tickets.

The play is raucous comedy and explosive drama about love & addiction, fidelity & loss and of course, misplaced haberdashery. WNY theatergoers will have a chance to give to an amazing charity and organization that helps so many, and experience a wild, funny and moving play.

The Mother****er With The Hat, by Steven Adly Guirgis was nominated for the Tony for best play in 2011. Set in the working class neighborhoods of New York City, we follow the story of 2 star-crossed lovers passionately trying to unravel years of co-dependence and addiction, as they struggle with their own flaws and explosive tempers. Pulitzer prize-winning playwright Stephen Adly Guirgis brilliantly created a rapid-fire, poetically profane, and hilarious masterpiece. The New York Times called it “a bruising, tragicomic apache dance of love, betrayal and indecision”.

The Alzheimer’s Association works on a global, national and local level to provide care and support for all those affected by Alzheimer’s and other dementias. As the largest nonprofit funder of Alzheimer’s research, the Association is committed to accelerating the global progress of new treatments, preventions and ultimately, a cure. Director Tony Gatto’s mother, Angeline Gatto who was born and raised in Fredonia, was diagnosed over 8 years ago and has been living with the disease ever since. This benefit is obviously close to his heart, and he works to make change so future patients have a chance to experience newer and better treatments, as well as being hopeful for a miraculous cure one day. Profits from this production will go to the Western New York Chapter of the Association.

Tagged as: SUNY Fredonia, The Motherfucker With The Hat, Tony Gatto