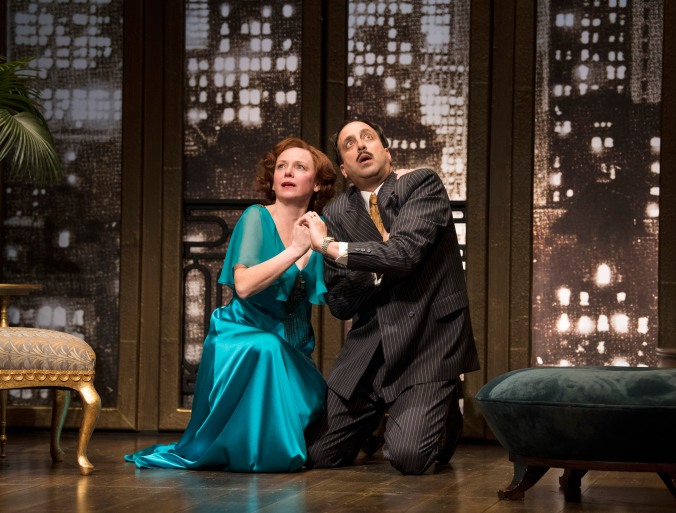 Fiona Byrne as She and Sanjay Talwar as Husband in Stage Kiss. Photo by Emily Cooper.

While it’s a little bit “Kiss Me Kate”with a  touch of “Noises Off,” “Stage Kiss,” onstage at St. George’s Theatre in Niagara-on-the-Lake’s iconic Shaw Festival 18, distinguishes itself in the ‘play within a play’ comic genre with one good plot twist and a few interesting insights on the difference between matured true love and unfinished 20-somethings romance.

American playwright Sarah Ruhl’s script isn’t over-the-top hysterical, but it’s witty and smart in just the right measure for a rom-com on stage. The story centers on He and She, two actors separated by time and circumstance, unexpectedly reunited for a revival of a flopped 1930s melodrama. Here She’s character is dying and her last wish is for one last meeting with her ex – He – now a famous sculptor in Sweden. She’s husband makes it so without regret, it seems. They fall back in love and she’s miraculously cured. Cue the irony.  The ‘real’ He and She are ex’s, too: She left showbiz to marry and raise a family, while He bounced around the country in minor roles for meager salaries. After a long absence, fate puts them on the same stage with an oft-distracted director and overly ambitious understudy. Life imitates art imitating art, and He and She find themselves – after a few awkward Act 1 moments – back in each other’s arms.

They do have an Act 2, starring opposite each other again in an original work (guess what? The same director is also a playwright), off-off-off Broadway….in Detroit. “It’s real, honest work,” says the director, pumping up the skeptical pair. It’s here that She realizes the difference between fizzy excitement and the comforts of her more grown up life.  “You’re champagne,” She tells He, “and you can’t just live on champagne. My husband is bread.”

This isn’t Ruhl’s finest script (New Phoenix Theatre staged  her Tony Award and Pulitzer Prize-nominated “In the Next Room…Or the Vibrator Play” back in 2011). The production itself elevates the almost sit-com script. Long time Show Festival actors Fiona Byrne and Martin Happer as She and He play their roles well. Byrne makes She nervous and a little twitchy that’s the perfect essence for a woman caught between looking back while examining her present and future. Happer’s take on He is just short of swaggering, without catching the trappings of success. I love their Act 2 interplay as they rehearse in character but converse as themselves. Neil Barclay is fine as the director, into his muse one minute, and focused on his phone in the next.

The rest of the cast does double duty with multiple roles.  Jeff Meadows is a riot as Kevin, He’s understudy, who can’t quite come to grips with having to kiss a woman actor on stage.  Sanjay Talmar is She’s husband in the melodrama and ‘real’ life. The real standouts are two young actors, Sarena Parmar and Rong Fu, ironically named Mille and Millicent in the stage production (“Why is everyone named Millie in this show,” wails She about the script) who also morphs into She’s daughter and He’s girlfriend respectively.  Parmar as Millie is the 20-something always cast as the teen: a few good hair tosses, eyerolls, and a Catholic school uniform later she’s giving her mom a good talking-to about the value of true, lasting love with a dead-on tattoo analogy. Fu sweeps through the melodrama in mink and then appears demurely dressed as He’s kindergarten teacher girlfriend. Fu’s  ‘my boyfriend is cheating on me with his ex’ meltdown is comic perfection, down to the secret joint in the bathroom to the “I find comfort in a PB&J sandwich” admission.

As we come to expect at the Shaw Festival, the sets are stunning. The barebones backstage of the rehearsal space, the lush Art Deco melodrama set, and He’s dumpy walkup apartment: Gillian Gallow nails them all. There’s more show-in-show fun as Barclay the director calls for lighting changes on a window and Louise Guinand’s lighting design performs on cue.

Well worth the drive over the border and the navigating the lively crowds on the street, “Stage Kiss” is a fine summer night of theatre.

“Stage Kiss” runs until September 1, 2018 and is presented as part of The Shaw Festival in Niagara-On-The-Lake in Canada. For more information, click here.