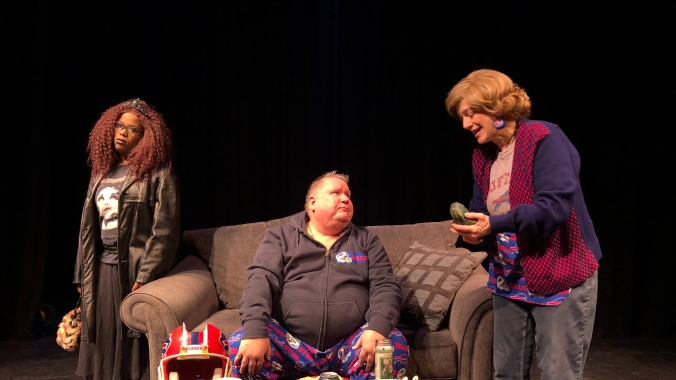 The cast of Kick Up Your Heals and Shout. Included in “Buffalo Quickies” at Alleyway Theatre.

It’s Alleyway Theatre’s spring rite of passage: the 27th annual “Buffalo Quickies” is replete with local talent, some Buffalo nostalgia, and a few things I just can’t figure out.

While some of the ‘quickies’ don’t always hit the highest playwriting mark, what is consistently impressive is watching the agility and versatility of the actors.

On opening night, director Joyce Stilson pointed out that of the eight playwrights represented in the line- up, seven are from Buffalo. This is significant: Buffalo’s cache as an arts and cultural beacon shines even brighter when local talent is recognized in meaningful ways. It’s a Buffalo gal’s work that leads off the night. Playwright Donna Hoke’s “Spirit of Buffalo” starts with the local soundtrack of the ‘70s, the “Talkin’ Proud” song,  which leads us to a cold ride on a snowy roadway. Andrew Zuccari is the mysterious Beau Fleuve (get it?) who raps on the window of Jacquie Cherry’s car as they wait for the road to clear. He’s a down home guy, and she’s a frustrated, sullen expat who finally remembers that a beef and weck and loganberry martini – served for a good Samaritan – can warm both heart and soul. Or as Beau Fleuve says, “We’re Buffalo. Crisis brings out the best in us.”

Zuccari gets into a summer groove for “Lawn Wars,” where he and neighbor Christopher Standart verbally mow each other down over the natural verses cultivated appearance of their adjoining properties. You have to love Zuccari’s tongue-twisting monologues and epitaphs in this world premiere as the two men tussle to find “turf détente.” Playwright  Matthew Boyle, like Hoke , is another local Quickie veteran.

Another world premiere “The Offer” has an out-of-this-world premise: ex-NASA scientist Grace (Cherry) is being offered an opportunity to test her research in a galaxy far, far away. Playwright Bella Poyton leaves you hanging, with plenty to think through with this one. What’s it like to live your dream if it means you’re never coming home?

“Notice” is a regional premiere by Peter Snoad that really highlights the versatility of actors Kate Olena and Bill Lovern. In just a few minutes, they change characters three times around a cryptic message on a t-shirt: Writers Notice. This show was a finalist in the Maxim Mazumdar New Play Competition last year: it has the right combination of funny and ironic moments.

Standart, Cherry, Olena, and Lovern are back again when local legendary broadcaster/playwright and Quickie veteran Mike Randall premieres “Johnny Stormcatcher” about a fed-up TV meteorologist who has had it with his toupee, his news director, and years of bad management decisions.

Another world premiere “The Death of Melendez” puts Standart and Lovern in the bleachers of a baseball stadium. Lovern prides himself on keeping accurate gameday records, Standart just likes to yell at the pitcher he loves to hate.

“When the Skeletons In Our Closets Choke on Candy Corn” pairs Zuccari and Tom Dreitlein as Halloween party guests who escape to the backyard for a metaphysical moment.

The fast-paced evening ends with the 2017 Maxim Mazumdar New Play Competition winner, “Kick Your Heels Up and Shout” by J. Snodgrass. Another local send up, this time focusing on a family (Cherry, Lovern, Olena) who take the Buffalo Bills’ desire to “squish the fish” very seriously.

While some of the ‘quickies’ don’t always hit the highest playwriting mark, what is consistently impressive is watching the agility and versatility of the actors. The same corps has a whirlwind of characters, costume changes, moods, and nuances throughout this 90-minute experience.  The real standout this year is Jacquie Cherry. In one night she morphs from snobbish expat to sullen teen to snubbed scientist with a latent hunger for discovery.

“Buffalo Quickies” is a local tradition that never disappoints. Alleyway Theatre is unique in this commitment to the one act genre, and for the theatre community, it’s one more reason to be talkin’ proud(ly). OK, had to do it. It’s been bugging me for almost 40 years!

“Buffalo Quickies” runs until May 5, 2018 and is performed at Alleyway theatre. For more information, click here.