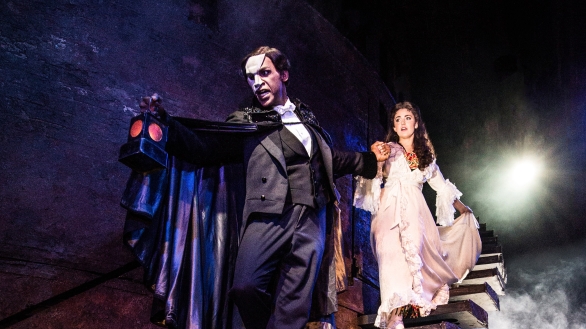 Quentin Oliver Lee and Eva Tavares in “The Phantom of the Opera.” Photo by Matthew Murphy.

Celebrating it’s 30th year on Broadway, Andrew Lloyd Webber’s “The Phantom of the Opera” is a show that lives on throughout generations, by continuously being introduced to new audiences all the time. When a show has such a long lasting presence, you wonder if the momentum can withstand. Well, clearly it can. Especially five years ago when Cameron Mackintosh launched a new production of the show and sent it across North America. This will be the second time that this tour will visit Buffalo, featuring a brand new cast, and an orchestra of fifty-two musicians.

The story of the masked entity who haunts the Paris Opera House and serenades it’s new star is boasted as “the greatest love story of all time.” It has all the makings of a classic, and it is due to this tale and wonderful music that keeps the “Phantom” machine moving.

Cameron Mackintosh is a name that many theatre goers know because he has been responsible for countless hits on Broadway and in the West End. “Les Misérables,” “Miss Saigon,” “Cats,” “The Phantom of the Opera,” and “Mary Poppins,” just to name a few, are the powerhouse productions that have branded Mackintosh’s name.

“There is not one thing that goes up on stage that doesn’t have Cameron’s input in it,” says Seth Sklar-Heyn, executive producer to Mr. Mackintosh – or in other words his right hand man for all North American productions – and Associate Director of the “Phantom” Tour, “He is what we refer to as a creative producer.”

The brand that has become Mackintosh’s name is one of elegance and grandeur. When an audience comes to see a performance that has his name on it, there is an expectation, and that is where Sklar-Heyn comes in.

“In my daily job, I oversee the creation of the overall package of a show,” says Sklar-Heyn, “everything from how the publicity materials look, to how the tickets are sold, to the audience experience when they see one of our performances. We want to make sure that when an audience member sees a Cameron Mackintosh show, it is a fantastic, memorable experience.”

Branding is everything, especially when the brand is known for having high standards. “There is a certain expectation when you come to see a show with either Cameron’s name on it, or Andrew Lloyd Webber’s name,” says Sklar-Heyn, “and I make sure that our performances and shows live up to expectations.”

For ‘Phantom,” Sklar-Heyn is the associate director, a job that many people wouldn’t even know existed, if it wasn’t listed in the program. “Laurence Connor, directed the new envisioning of this show for the tour, and after the show opened, he moved on to another project. It is my job as associate director to witness the overall creative achievement of the production that Laurence set, and maintain that standard,” says Sklar-Heyn.

So, how exactly does one maintain the standard over a living breathing production that is never truly ‘set in stone’?

Sklar-Heyn says that the true litmus test is seeing what the director created, and making sure that every performance after the show opens, lives up to that standard, or surpasses it. “With a show like “Phantom”, which is known by so many, there is a feeling of nostalgia that comes with it, and people expect it to live up to their memories from before.”

Sklar-Heyn says that “Phantom” is the Cadillac of Broadway tours. “This show travels across the country in twenty tractor-trailer trucks, where we are delivering scale equality of a Broadway production, and that is truly remarkable.”

This attention to detail does not go unnoticed. “We might only have one opportunity to leave a lasting impression,” says Sklar-Heyn, “and it is because of this attention to every detail that our audience comes back to us again and again.”

“The Phantom of the Opera” runs April 25 – May 6 at Shea’s Buffalo Theatre. For more information, click here.