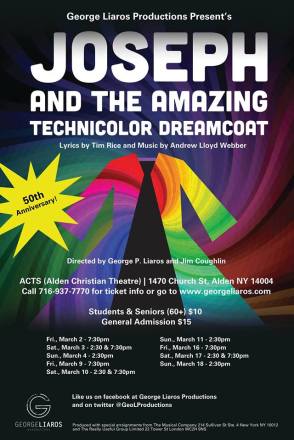 Back when I was in third grade, my younger sibling and I watched a recorded VHS of Donny Osmond in a movie version of “Joseph and the Amazing Technicolor Dreamcoat” every night for nearly a month. The songs are catchy, the mood is fun and there’s a happy ending – what’s not to love? After seeing George Liaros Productions’ version onstage at the Alden Christian Theater Society (ACTS), I can personally vouch that the musical has stood the test of time and is still as fun and campy as ever.

Andrew Lloyd Webber’s musical, now celebrating its 50th anniversary, follows the story of Joseph found in the biblical book of Genesis. One of Jacob’s twelve sons, he possesses a unique ability to interpret dreams and holds the favor of his father, much to his brother’s frustrations. When he is gifted with a gorgeous coat of many colors, the brothers cannot control their jealousy and sell him as a slave to a traveling party, sending Joseph on a journey that changes all of their lives.

George Liaros, assisted by Jim Coughlin directs an energetic cast led by Ethan Schrodt as the titular character and Kate Francis-Schrodt as the narrator. Both have strong, lovely voices and carry more than half of the score by themselves. Schrodt’s Joseph is honest, devoted and vulnerable and Francis-Schrodt gives the right amount of engagement in every scene. She shines brightest when navigating Lloyd Webber’s most tongue-tying phrases with incredible ease.

While the Pharaoh doesn’t appear until Act 2, he’s typically an audience favorite in “Joseph” and Dan Barone in this production is no exception. Done up in heavy eye makeup, Barone is strong and confident in “Song of the King,” fearlessly shaking his hips and belting out the lyrics. He’s especially enjoyable to watch as Joseph becomes more popular with his posse, as his jealousy makes for some great facial expressions.

Despite being small and lacking the traditional dozen men, Liaros’s ensemble is stellar. They are vocally strong throughout most of the show and are clearly enjoying themselves in every scene and song, especially while performing Sara Johnson’s fun choreography. They’re all great, but it is Mark Jablonski, Bill Baldwin and Dylan Zielinski who steal the show with hilarious physical comedy, exaggerated facial expressions and well-timed comedy bits.

Liaros chose an incredibly ambitious set and technical elements for this production considering the limits and intimacy of the theater. While the runway down the center of the theater provides some much-need space for the actors, there are some moments when the actors are almost on top of the audience. The lighting, however, while also “big” for that specific theater, was utilized at its fullest for all of the right moments, especially during Act 1’s closer, “Go, Go, Go Joseph.”

Some of the orchestrations also get lost in the use of a recorded soundtrack for the show, but that is soon forgotten thanks to the stellar ensemble’s first appearance in “Jacob and Sons.”

While it’s clear Liaros could’ve used more men in the cast, the talented ensemble he assembled delivered an unforgettably spirited performance that will leave you with a smile. “Joseph” is an ideal remedy to our persistent winter and worth the short drive to Alden.