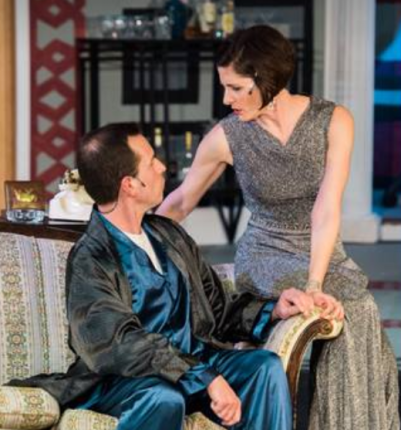 If you follow along a certain creek meandering through Tonawanda, you’ll eventually happen upon the Ellicott Creek Playhouse.  It stands to reason, then, you would be following along Ellicott Creek. The whole thing gives you a new appreciation for the folks who name things like creeks and playhouses.  The straight-up wisdom and simplicity of it.

. . .they have brought together a mix of some veteran players and relative newcomers to their stage to give us a straight-up engaging, at times hilarious comedy. . .

The Ellicott Creek Playhouse is home to Niagara Regional Theater Guild (NRTG) which, in one form or another, has been in the practice of theater for 95 years.  It stands to reason, then, they have been doing something right for a very long time. One of those somethings is that the venue as a whole is a just right mix of welcoming community space and practiced trades-people of theater.  And springing forth from that one-something comes the NRTG’s current offering of Noel Coward’s play, “Present Laughter.” You could say NRTG brings the wisdom of experience.

The straight-up simplicity of it – “Present Laughter” was written in the 1930’s and made it to the theater in the early 1940’s.  It has been produced and brought to stage many times since, in many venues, right up to the near present on Broadway. So “Present Laughter” must be a thing that can provide audiences with laughter in the present, whenever the present.

The present is current.  And the play, set in the 1930’s, follows several days and evenings in the life of English actor Garry Essendine (Marc Ruffino).  Essendine is an actor full at heart, given to dramatic flights of fancy and impromptu quotes from parts he’s played and not played in his efforts to maintain his hold on, and tame the mayhem of, the stream of players that surround him.  It is a life in which he is the center. His hold is precarious at times, making the action a romp through the challenges to Essendine’s self-absorption.

The challenges come in the forms of his maid, butler, secretary, and ex-wife to name a several – all adding to Essendine’s dismay and playing off his dramatic discord.  With the entire ensemble, Ruffino juggles very well a charm, pinache, desperation, and contrived melancholy to create a very pleasing, funny, and a just short–of-over the top character.  He carries a fine mix of sensibility, physical-facial comedic recognition to bring the audience along. He brings the audience into Essendine’s plight, at times, almost talking to them, then turns and plays it with just enough pomposity to remind the audience that Essendine is at least partly the cause of his own dismay.

If Ruffino’s character keeps the challenges to his vanity from becoming mayhem, Brian Tabak’s rendering of the infatuated and oddly bookish playwright, Roland Maule, presents a character that paces and preens over Essendine like some mad cat in heat, to the audience’s delight.  He brings another level of mayhem. So raucously comical was Tabak’s initial scene that when his character came to appear again, the audience responded with a hushed, “Uh-oh.”

The plot is predicated on Essendine keeping his world of acting, ego, and self-admiration together.  His inner circle of hired hands and theater cohorts help him keep it alive, because they do need him.  But when the lovely Joanna Lyppiatt (Lori Panaro) enters to try and seduce him into a love quadrangle, it threatens all of it.  Because Essendine’s band of characters do care for each other, they are not just colleagues.

The exchanges between Panaro and Ruffino are as well-matched as the characters themselves, both knowing what is at stake but both confident in their own natures.  Panaro’s performance mixes a perfect amount of confident class while with an alluring, un-sweet portion of a self-assured manipulator.

You can probably look up exactly what happens if you wish, as it’s likely that a lot has been written about this play.  But this production, taking place in the present, and put forth by a group that’s been around longer than the play itself, is a far more enjoyable experience.  In fact, it’s at times hilarious farce, at times cleverly written, and each turn is well played.

The NRTG production lends itself to all of this in its welcoming, unassuming gathering of people, and space that lends itself to an intimacy with the players.  The stage is surrounded on three sides by audience seating. And the actors are most often just above, just below, or right at eye level with the audience — a treat with all the non-verbal antics that fill the lines of the script.  The set is nicely done with all the necessary props needed to support the action, and with some clear effort to giving the 1930s English studio a touch of realism.

NRTG has been at it a long time.   With its latest production, they have brought together a mix of some veteran players and relative newcomers to their stage to give us a straight-up engaging, at times hilarious comedy, and they do it in a welcoming setting for any comedy loving, theater going, creek meandering patrons to enjoy.

“Present Laughter” runs through March 25, 2018 and is presented at the Ellicott Creek Playhouse. For  more information, click here.