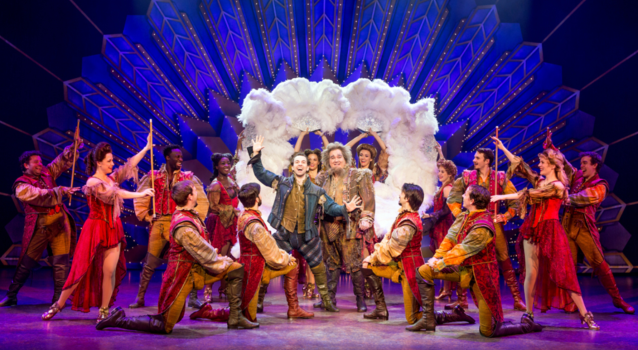 The cast of the National Tour of ‘Something Rotten!’ Photo by Jeremy Daniel.

“Something Rotten!’” was the second production I ever saw on Broadway. I was lucky enough to see it a month or so before it closed and the North American Tour launched. I was completely blown away by the humor, the production value, and the energy that this show had. It also had something that you don’t typically see in contemporary musicals. It had heart. I absolutely enjoyed the show, and since, I have anxiously been awaiting for it to come to Buffalo, so that I could review it. The real question is, does the tour live up to the powerhouse that this show was on Broadway? The answer? Yes.

. . .a breath of fresh air. It’s funny, it’s different, and it is a show that you are likely to never forget!

“Something Rotten!” the completely original musical conceived by Wayne and Karey Kirkpatrick, about a pair of playwriting brothers, Nick (Rob McClure) and Nigel (Josh Grisetti), as they embark on the mission to write the next big play in the English theater. Their rival? William Shakespeare (Adam Pascal), who just keeps cranking out, hit after hit! After a battle of the wits with Shakespeare, Nick, goes to visit a soothsayer, Nostradamus (Blake Hammond), who tells him that if he wants success, he needs to write a musical, for that is the trick to beat the Bard.

“Something Rotten!” is a love letter to theatre lovers everywhere.  Countless musicals are parodied as Nostradamus tries to understand his visions, and Nick tries to pen the next big hit. I guarantee that you will be doubling over in stomach pain from laughter. Deep belly laughter. I have not seen such a creative show, well since I saw this on Broadway, in a long time.

Leading the cast as Nick is Rob McClure, who played the role on Broadway before the show hit the road, and is perfect for this role. He brings the humor, the charm, and the heart to get the audience to love him. He has all the makings of a leading man, and he does not disappoint.

Josh Grisetti as Nigel is hilarious. Grisetti’s comedic chops are flawless in this show and he is definitely a crowd favorite. Along with Autumn Hurlbert’s Portia, the pair have a fantastic romantic chemistry.

Adam Pascal plays the role of William Shakespeare. Pascal took over the role on Broadway once the show was coming to a close, and was extremely entertaining. While Pascal still is entertaining in this tour he seems to be rushing through the material, and doesn’t let it breathe so the audience can fully grasp the humor.

Nostradamus is played by Blake Hammond, who is the perfect choice for this role. His performance as the quirky soothsayer is fantastic. He literally stops the show during “A Musical” and has so many funny one liners that you will be laughing like crazy.

Overall, this production is a breath of fresh air. It’s funny, it’s different, and it is a show that you are likely to never forget!

“Something Rotten!” runs until March 11, 2018 and is presented at Shea’s Buffalo Theatre. For more information, click here.