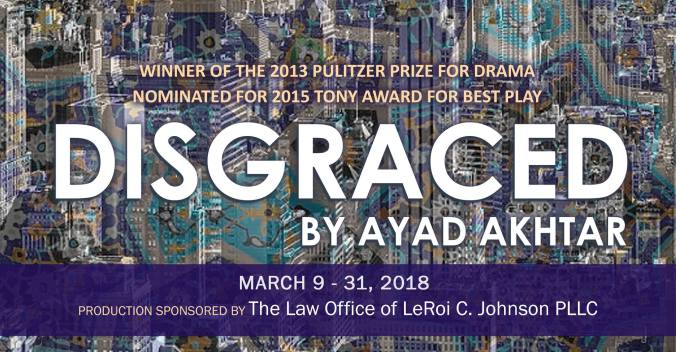 When it comes to producing new works, Road Less Traveled Productions has no problem taking the gritty new words of contemporary playwrights, and putting them on the stage. These works are often time real life situations that audiences can relate to, about topics that are very hard to discuss, and that cause tension and uneasy feelings. This is exactly what you will find in the 2013 Pulitzer Prize winning play, “Disgraced” by Ayad Akhtar, opening March 9 at Road Less Traveled Theatre.

“This show discusses exactly what Grandma told you not to talk about in mixed company, politics, religion, and race,” says John Hurley, who is directing this show, “this script is so fast and furious, it will really keep your interest.”

“Disgraced” tells the story of a dinner party, where the guests come from very different walks of life, including; the American-born, Muslim raised lawyer who works at a prestigious law firm in Manhattan and is up for a promotion; his white wife who is an artist; her Jewish art dealer, and an African American co-worker who was just granted a huge promotion. These characters take the audience on a rollercoaster ride of debate, and in the end, the audience must decide who is right.

“All five characters are intelligent,” says Hurley, “they are looking at a problem, giving their own angle on the situation, and they are all trying to remain friends.”

In social times where there seems to be lots of unrest in various societal issues, Hurley says that this is a play that America needs right now. “I love the play, and what I love about it is as you watch it, you find that there are no right answers,” says Hurley, “the characters dump a bunch of information onto your lap, and you are asked to form your own opinions. It’s a play that doesn’t preach.”

Scott Behrend, the executive/artistic director of Road Less Traveled, has really been spearheading the efforts to bring contemporary theatre to the Buffalo stage in recent years. “Scott brought this play to the board for approval, and there was a little back and forth over doing it,” says Hurley. “One of the major obstacles being casting. We truly lucked out with everyone we cast in this show.”

What does a director hope his audience gets from a show that asks them to sit and watch a very uncomfortable situation take place? “Whatever you want to take away from it,” says Hurley, “this is not a play of answers. You will learn a lot about Islam, art, the law, and the show is not going to tell you what to think.”

“Disgraced” opens on March 9 and runs until March 31, 2018. It is presented at Road Less Traveled Theatre. For more information, click here.