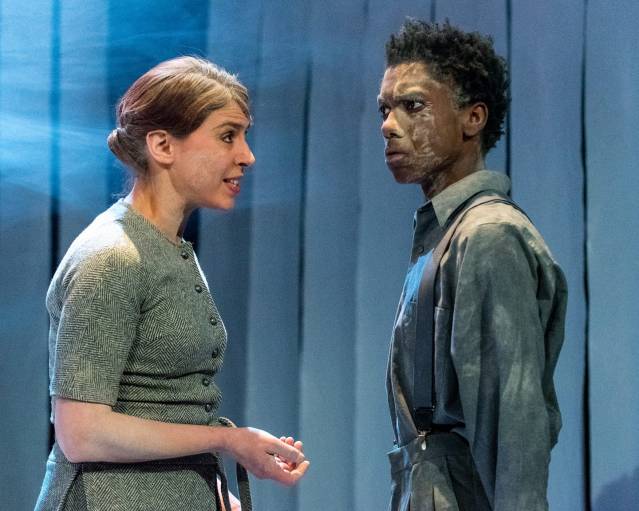 The cast of “Far Away” at Torn Space Theatre. Photo by Mark Duggan.

The opening scene of the Torn Space production of Caryl Churchill’s “Far Away” is the most engrossing. In it, a young girl named Joan (Allison Barsi) approaches her aunt Harper (Bonnie Jean Taylor) to tell her that she cannot sleep. TST mainstay Taylor is particularly strong, her performance, characterized by restraint as well as range, often grounding what will be a plot-lite and highly suggestive production. The exceptionally talented Barsi — a ninth-grader — matches her, though, perfectly balancing in her delivery a fear of what she saw, an assertion of its truth, and a readiness to believe the best of it.

Fine performances, choreography, set design, sound, and lighting conspire to render powerfully something that is only suggested in Churchill’s script.

As the girl and the woman, both dressed with a sort of fascicized Puritan sensibility, move about a small room of wood and lit white sheets, not square but opening outward toward the audience, and set on a rounded bottom: Each step an actor takes sends the whole contraption – the home – tilting and thunking from side to side. Intimacy, here, is impossible. Touch is unnatural. There is no comfort in any corner.

From their strained conversation, the audience pieces together that the world is in conflict and even those with intact families and homes live in a state of constant fear and suspicion. “Here we are,” Harper reassures her niece, “in our little bit of space, and I’m on the side of the people who are putting things right.”

We tell ourselves stories in order to live – so Joan Didion says. In the world of “Far Away”, Harper’s simple, flimsy story may be the only one left worth telling. We can almost hear it collapse along with scenographer Kristina Siegel’s house at the close of the act.

The second act opens on an adult Joan (Corrine McLoughlin), now a milliner in a stark, futuristic factory, where she, her coworker Todd (Kalub Thompson), and other artists make high-fashion hats for prisoners. Allusions to corruption, mass incarceration, futility, and execution are layered over the undercurrent of general and all-encompassing conflict, as the dialogue loosely links the themes of aesthetics, imprisonment, observation, judgment, and production and consumption.

“The script for ‘Far Away’ resembles a relief for what could be a vast epic of 20th and 21st century turmoil,” writes director Dan Shanahan. The particulars of culture, geography, and exposition have been erased, leaving only a system at the root of the turmoil.

Following the collapse of the home — a defined, if precarious, “little bit of space” — all of the characters are radically exposed, and slip further into a manic anxiety of affiliation. In Churchill’s world, every constituency of the natural world is at war with every other: Japanese and French, as well as deers, mosquitos, cats, and children under five. Alliances are always shifting: “The dentists have been linked with international dentistry, and that’s where their true loyalties lie,” Joan shouts, in one example of the play’s characteristically quick-guttering humor.

Written and first produced in 2000, Churchill’s play was a frank warning to an increasingly divided world. Nearly 20 years later, the warning’s last echo has died and we see in the work only a stark reification, embodiment, and animation of our hyper-partisanship. When Todd remarks that life here and now is “tiring … because everything’s been recruited,” he is voicing, in Churchill’s simple and effective language, nearly every audience member’s secret end-of-the-workweek thoughts.

Audience members looking for a a satisfying narrative arc, high drama, clever banter, or Aristotelian catharsis would do better to look elsewhere. But for the theatregoer hoping to be unsettled and impregnated with an idea that may not give its first full kick until long after you’ve stepped back out onto Fillmore, “Far Away” is worth seeing. Fine performances, choreography, set design, sound, and lighting conspire to render powerfully something that is only suggested in Churchill’s script. As the descriptions of parties, sides, and alliances multiply and grow increasingly absurd, an absence at the heart of the performance widens. While there are countless Others, there is very little — save accidents of proximity, incarceration, and death — on which to found an “us.”

“Far Away” runs until March 11, 2018 and is presented at Torn Space Theater. For more information, click here.