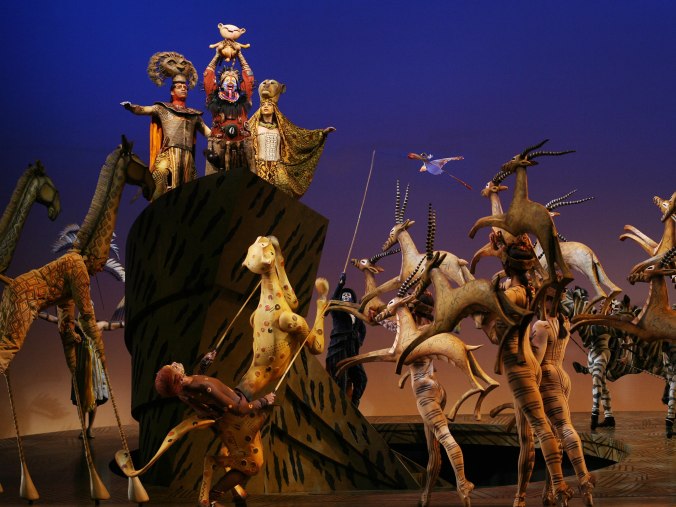 The Broadway cast of ‘The Lion King.’

I remember seeing “The Lion King” in 2005. It was a grand occasion. My Mother and Sister-in-law bought my family tickets for Christmas, and we all went to see the show on Easter. It was a great experience, and one that I still remember. Twelve years later “The Lion King” returns to Buffalo. Even in that twelve years since I last saw it, the show is still amazing.

. . .I absolutely loved the show, and I would suggest that everyone go and see it. It is a night out that you are never going to forget.

“The Lion King” has been a force to be reckoned with. Not only is this Disney phenomenon a great story, but it stands the test of time as a great coming of age epic. “The Lion King” tells the story of Simba, who is preparing to become the King of the Pride Lands, but after being yelled at by his Father for going somewhere that he shouldn’t, he runs away. Simba’s Uncle, Scar, wants to be King, and will stop at nothing to get his way. Even murdering his own brother is not too far of a stretch. As Simba grows, he learns the truth about his Father’s death, and he learns that he needs to find the strength inside of himself to be the King that he wants to be.

“The Lion King” is still phenomenal after all these years. I am completely blown away by it, and it is the second time that I have seen it. The talent in the cast, the pageantry, and the music all come together to create an experience that is still stellar, even if you have seen the show before.

I absolutely love how you know that actors are making the entire show happen right in-front of you, but you don’t notice them as they play animals, and grass, and other scenery. Your mind is able to fill in the blanks, and you accept the animals, as beings that are taking to the stage. It is a brilliant production. It makes theatre enjoyable to those, who might not be big fans of live entertainment, or even musicals.

Leading the show as Simba is Gerald Caesar, and he takes this character and makes it his own. I absolutely love the choices that he makes, and even though I was very familiar with the story, and the character, I was still surprised at how much of his own spin he could bring to Simba. He does not disappoint.

Gerald Ramsey as Mufasa is a great choice, especially for the paternal figure and King in this story. The chemistry between Ramsey and Caesar is wonderful, and you can tell that they understand the dynamic that is needed for the audience to care about this story and for them to root for Simba when he starts doubting himself.

Mark Campbell’s portrayal of Scar is deliciously evil in this show. You love to hate him, and you cringe when you see him slither to the stage. He keeps the conflict flowing in this show and also provides a few laughs here and there, as a stereotypical Disney villain is expected to. He is an enjoyment to watch work on stage.

Nick Cordileone and Ben Lipitz as Timon and Pumba respectfully, are hilarious in these roles and bring a ton of comic relief to this story. “Hakuna Matata” is one of my favorite songs, and I would sing it with my kids all the time while they were growing up. It is a sentimental moment in the show for me, and these two do it complete justice. It was a welcomed treat to hear it again live.

There really isn’t anything that I can say negative about this show. From beginning to end, the puppetry, costumes, storytelling, performing, music, and singing are all wonderful. I absolutely loved the show, and I would suggest that everyone go and see it. It is a night out that you are never going to forget.

Disney’s “The Lion King” runs until January 7, 2018, and is presented at Shea’s Buffalo Theatre. For more information, click here.