Theatre Review: ‘American Idiot’ at UB Center for the Arts 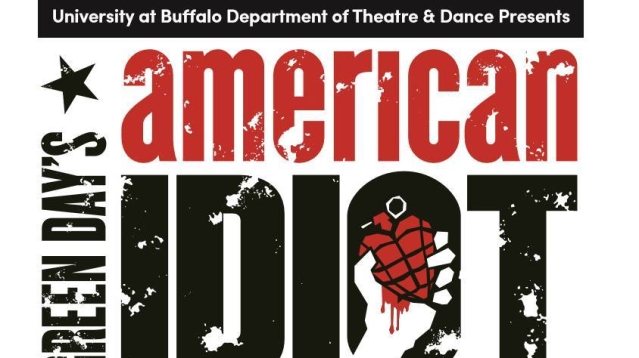 Nearly one year after a polarizing presidential election, more and more young people feel motivated to speak out against corrupt government and express their anger at the current state of affairs. “American Idiot,” based on the Green Day punk rock album of the same name, is a musical canon for that sense of rage and feels all too appropriate for current events despite being written during the George W. Bush administration.

The University at Buffalo’s Department of Theatre and Dance opened their production Thursday, offering a technically impressive and ultra-angsty show. Thankfully for everyone who will ever see “American Idiot,” Tom Kitt’s musical arrangement and orchestrations of Green Day’s music are amazing. It’s truly one of the best contemporary translations of popular music for musical theater.

The loose plot follows the paths of three friends – Johnny (Bobby MacDonell), Will (Joe Wood) and Tunny (Holden Bath) who all plan to escape suburbia in protest of the state of the union and their seemingly purposeless lives. When Will stays behind with his pregnant girlfriend, Heather; Johnny and Tunny head to the city and follow two very different paths – Tunny, wallowing in apathy, joins the Army, and Johnny begins using heroin and pursues a girl he saw in an apartment window.

Gary John La Rosa directs and choreographs an energized ensemble who almost have too much fun running around the stage in dyed hair and punk clothing. La Rosa’s choreography is intense, high-energy and especially impressive considering how many of the set pieces have to move during most routines. While there are a few moments that go unnecessarily too far or feel a little “too college theater,” the production is strong as a whole.

MacDonell, Wood and Bath are a strong trio. MacDonell has some strong moments, especially during “When It’s Time” and when battling the demons of his addictions. Bath is arguably the stronger actor, especially as his character experiences the costs of war, but Wood knocks it out of the park with a strong voice despite singing a chunk of his lines upside down on the couch.

William Hin plays St. Jimmy, Johnny’s manifested drug-dealing alter ego, and does so brilliantly. He’s wild, untamed and out of control, donning a mohawk, edgy makeup, and combat boots to fly around the stage and flawlessly belt out his songs. Hin’s performance set the bar so high that some of his fellow castmates struggled to match his energy throughout the rest of the show.

Alexandra McArthur’s rich voice in the role of “Whatshername” is intoxicating. While she doesn’t have a traditional musical theater voice, McArthur performs with a lot of heart and her unique vocal stylings shine in “21 Guns” and “Letterbomb.” Also worth mentioning is ensemble standout Thomas Evans as the “Favorite Son.”

Tatyna Wilds’ projection design is excellent against Gina Boccolucci’s set. Coupled with Hayden Harter’s lighting design and Nathan R. Matthews’ sharp music direction, the show is visually and audibly invigorating. As long as the microphone issues from opening night can get worked out going forward, the production will be even stronger.

“American Idiot” lends itself well to a college theater department with its punk rock score and angsty undertones. UB does well with this production thanks to killer choreography performed by a strong ensemble.

Running Time: Approximately an hour and 40 minutes with no intermission

“American Idiot” runs through December 3rd, 2017 and is presented at UB Center for the Arts. For more information, click here.

Tagged as: American Idiot, UB Center for the Arts