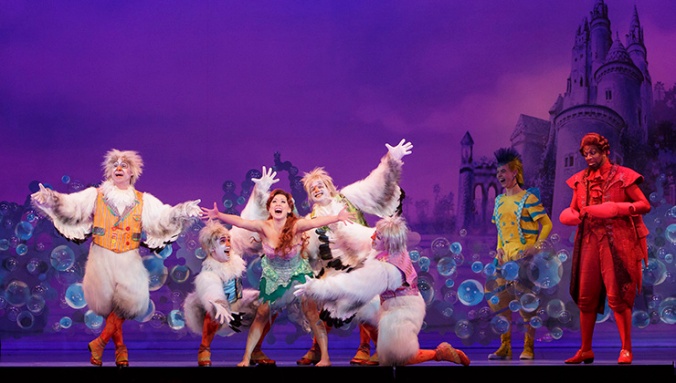 The national touring company of “Disney’s The Little Mermaid.”

I was never a big fan of ‘The Little Mermaid’ growing up. It wasn’t because it was a bad movie, but by the time that I was old enough to watch it, it had already been around for five or six years. In my house “The Lion King” and “101 Dalmatians” reigned supreme. Those films were watched religiously and if you were like me, once you found a movie you liked, it was really hard to accept a new movie into your life. This is serious business after all. The movie you choose to like the most is a decision that will affect your entire life! Okay, perhaps that is a little extreme, but “The Little Mermaid” is a film that I have only seen once or twice. I am happy to say, that as a stage adaptation, the Pittsburgh CLO and Kansas City Starlight’s Production of this Disney classic is cute, and most importantly, entertaining.

Whether you are three, or one-hundred and three, this staging is fun for everyone.

“The Little Mermaid” tells the tale of Ariel (Diana Huey), the youngest mermaid in her family, who longs to explore the world above the sea, but while under the watchful eye of her father, King Triton (Steve Blanchard), is sheltered into staying in the kingdom. After disobeying her father (because if she didn’t, we’d have no story at all) she spots the man of her dreams, Prince Eric (Eric Kunze) who Ariel saves when he is thrown overboard of his ship. After coming to, Prince Eric falls for the girl with the pretty voice who saved him. Unfortunately, with Ariel being a Mermaid and Prince Eric being a human, King Triton won’t have it. In order to follow her dreams, Ariel makes a shady deal with her Aunt Ursula (Jennifer Allen), the banished sea octopus of the deep, to meet the man of her dreams. However, when things go south, Ariel has to decide what is most important to her, her family, or the love of her life.

Pittsburgh CLO and Kansas City Starlight’s production of this beloved Disney classic is guaranteed to bring a smile to your face. Whether you are three, or one-hundred and three, this staging is fun for everyone. Leading the show as Ariel is the very talented Diana Huey who possesses a voice like a Disney princess and does a marvelous job in this role. Huey defies everything I understand about singing, while being flown across the stage on a wire and supporting her vocal performance. She brings the innocence to the stage that is needed to successfully tell Ariel’s story and she does not disappoint.

Jennifer Allen is deliciously evil as Ursula. In true Disney fashion, the villain in the piece typically is awarded the goofiest story arc, and this is no different. Allen is funny, obnoxious, and over the top, yet is probably my favorite character in the show. She gets the laughs, hams it up on stage, and successfully portrays a Disney villain. She steals the show whenever she enters the stage.

Eric Kunze as Prince Eric is a nice choice. Kunze plays the role by placing a great deal of heart into it, without being a caricature of a prince, you could actually see Kunze being a prince in real life. He compliments Huey’s Ariel very well, and makes us believe that this budding romance between the two is happening.

Melvin Abston is hilarious as Sebastian, the crab and right hand man to King Triton. Abston has wonderful comedic timing and is instantly an audience favorite.

Amy Clark and Mark Koss’ costumes are spectacular. The creativity that is used to create these underwater sea creatures is wonderful. You will be in awe when you see what they have created for this production.

Kenneth Foy’s scenery design is beautiful and assists in creating an atmosphere for this wonderful production. Employing the use of the audience’s imagination is no easy feat, and Foy is able to give us just enough stimulation to allow us to fill in the rest ourselves.

Overall, this is a fantastic production. I loved every minute of it. Do yourself a favor, go see this show!

Running Time: 2 Hours and 30 Minutes with one 15 minute intermission.

“Disney’s The Little Mermaid” runs until August 20, 2017 and is presented at Shea’s Buffalo Theatre in Buffalo. For more information, click here.