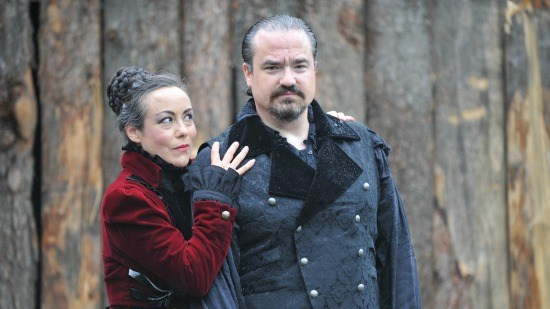 “So ye shall not pollute the land wherein ye are,” the biblical book of Numbers warns, “for blood it defileth the land: and the land cannot be cleansed of the blood that is shed therein, but by the blood of him that shed it.”

Witches, prophesies, moving woods, and Cesarean sections are secondary: this is the plot of Shakespeare’s “Macbeth,” “That Scottish Play.”

Or, as our titular villain says in Act II, Scene IV, “blood will have blood.” Director Saul Elkin understands this much, and doesn’t need to dump buckets of the stuff to put on a fine production, one that Western New Yorkers should make every effort to see.

Shakespeare in Delaware Park’s mounting of “Macbeth,” one of Shakespeare’s shortest works, is happily a swift and bracing follow-up to the unwatchable “Merry Wives of Windsor,” in which an outmatched cast under dubious direction acted at half-speed the dullest game of Mousetrap ever played — a family game night complete with missing cheese pieces, forced laughs, and the malfunction of that infernal diving board man. By contrast, this season’s “Macbeth” is very good Shakespeare, with everything one expects from very good Shakespeare: leads capable of leading (in the sturdy Matt Witten and the confident Lisa Vitrano), delightful dialogue, and even a Shakespearean scene-stealing fool (Gerry Maher in perfect pitch as our porter).

In the play, the valiant (or just lucky) Thane of Glamis, Macbeth, returns from a successful battle and encounters three witches who offering a rhyming prophecy: He will be Thane of Cawdor, then king. In a classic expression of Scottish FOMO, Macbeth’s friend Banquo demands a prophecy for himself, and the sisters say he will not be king, but will beget a line of kings. When kind King Duncan comes under Macbeth’s roof and names him Thane of Cawdor, Macbeth is sufficiently convinced (with some urging from his wife) to complete the prophecy, violating loyalty, honor, and the duty of hospitality by killing his king and taking the crown. Thus “fair is foul and foul is fair”: We see the reversal or total abandonment of of gender, husband-wife, king-thane, guest-host, and other relationships. Our Macbeth rules poorly, killing friends and innocents, succumbing to paranoid visions, shoring his self-confidence up with scraps of prophecy he does not understand, and finally falling under the blade of a more loyal thane, who willingly hands power over to Duncan’s son, an Anglophile posh-boy who restores order, modernizing and anglicizing those wild Scots, to boot.

Attention to detail pays dividends in this production. We can forgive one or two minor players for the distraction of grasping their swords by the blades; we can forgive an army in contemporary camouflage fatigues; a man in a kilt and a see-through mesh tank that wouldn’t have been out of place at a Funky Monkey “Gaelic” night; and witches in Cirque du Soleil outfits, high-stepping to music you might hear in an internet cafe in Garden City, N.J., if North Korea wins the next great war. On the whole, the costuming is fine, the music is unintrusive, and Steve Vaughan’s fight choreography is riveting, both when making full use of the large cast and when our attention is fixed on only two or four players. The moment when Macbeth and Lady Macbeth grasp each other’s bloody hands is well-played and immensely satisfying. And the scene in which Macbeth’s hired murderers (Brett Klaczyk and Ben Caldwell) kill Lady Macduff and her child (Jamie Nablo and Joel Fesmire or Brady Sadkin, alternating), the mother flailing on the floor and scraping toward her son as if unaware of the cloth around her neck, is physical theater every bit on par with Shakespeare’s words, and an illustration of the truism that productions live or die by their minor characters.

There is something unsettling about the play — besides its brutality. It is the absence of any motive sufficient for the the villains’ crime, or their later guilt and madness. Something in us resists believing Lady Macbeth’s immediate ecstasy of ambition on hearing — secondhand — of the witches’ prophecy. And there is something off about Witten’s muted performance in the first half, in which he hears the prophecy of his kingship, contemplates murder, and enacts it.

But so too was there something off in Sir Ian McKellan’s turn as Macbeth in 1978, as in nearly every other actor’s attempt. The fault is not (entirely) Witten’s, McKellan’s, or any other actor’s. Even if, as some have theorized, our “Macbeth” is an incomplete version of an undiscovered whole, Macbeth the man remains an incomplete villain: not as charming as the deformed and exuberant King Richard, not as provokingly ambiguous as Shylock, and not as fascinating an incarnation of evil as Iago. Moving amidst a cast of dimensionless characters — including his wife, whose desire to be “unsexed” and give full play is never fully developed, and whose descent into the madness of guilt comes on too quickly — Macbeth, who bears none of the marks of a truly ambitious man, calmly weighs the cons of killing his king and decides to go through with it — as if he “might as well.” We are willing to move past this once the energetic third, fourth, and fifth acts begin to sweep us along, but the lack of proper set-up in the beginning makes Macbeth’s eventual fall less (immediately) powerful.

Similarly, the poet-critic T.S. Eliot complained in his essay “Hamlet and His Problems” (which will someday, I hope, be the title of a puppet version of the play), that “Hamlet” is an “artistic failure,” because the title character is gripped by emotions that are not justified by the circumstances of the plot. Hamlet, he argues, is less trapped in his puns and plays and equivocations than is the author, who has not mastered his materials, attempting to express an inexpressible emotion.

As was the case with many things immediately beneath his very sensitive nose, Eliot missed the point (or more precisely the success) of “Hamlet,” as we may easily miss the success of “Macbeth.” Without realizing what he is saying, Eliot writes of Hamlet that “The intense feeling, ecstatic or terrible, without an object or exceeding its object, is something which every person of sensibility has known.” And Shakespeare’s characters, like Dostoevsky’s, know and live these feelings more powerfully than the rest of us.

Romeo and Juliet’s hasty love and hastier suicides, Hamlet’s disgust and equivocation, Iago’s jealousy, and Shylock’s stubbornness — all are examples of “intense feeling, ecstatic or terrible,” that lack or exceed an object. So too Macbeth’s ambition, guilt, and paranoia — and finally his face-off with fate. His every action and reaction is not only irrational, but drawing on an unplumbable hot spring at the bottom of the pool of human emotions, a force that has no correlative.

So, Vitrano’s 180-degree turn from harpy-wife to guilt-stricken suicide may not be supportable or believable; but she plays both turns with unimpeachable conviction. And Witten might have struck different notes in the first half of the production, making Macbeth’s arc steeper and more interesting; but when he is raving we will believe anything he says. By the final act, we have abandoned any need for “complete” characters whose every action is really a reaction, in perfect proportion to some element cleverly revealed in a bit of backstory. We believe — no, we feel,  as Macbeth has told us — that

Creeps in this petty pace from day to day

To the last syllable of recorded time,

And all our yesterdays have lighted fools

The way to dusty death. Out, out, brief candle!

Life’s but a walking shadow, a poor player

That struts and frets his hour upon the stage

And then is heard no more: it is a tale

Told by an idiot, full of sound and fury,

Only thus can we understand Macbeth’s murder, his guilt, and his final decision — straining against a heavy chain of choices tied to total belief in an incontrovertible fate — to fight fate, to fight though Birnam Wood has come to Dunsinane Hill, to fight against a man not born of woman. To “try the last.” We cannot explain why he has staked everything on “fate” and why he now denies it, “beard to beard” — and we cannot help but understand it.

“Macbeth” is timeless, and not just because it is so obviously an influence on “Game of Thrones.” It spans cultural paradigms from the medieval social system to the “absurd” of Albert Camus.

It is also worth mentioning that “Macbeth” is a work aware of and shaped by the political currents of Shakespeare’s day. We see Banquo, widely believed to be the ancestor of Shakespeare’s king and patron James I, turned from a traitor and fellow regicide into a morally ambiguous foil to Macbeth. Contemporary audiences would have heard echoes of the Gunpowder Plot (for American readers: the one that made Guy Fawkes famous), giving rise to an interpretation of Macbeth as deeply conservative, a play reaffirming the existing social and political order. Even the witches (and their cauldron) are borrowed more or less whole from the Berwick witch trials stirring up fears across the country at the time of writing (for comparison, imagine a playwright today turning to Buzzfeed or the MSN homepage to see what the “Florida man” has been up to, and adding the news story in as a plot device). And the play still has a particularly local contemporary resonance. When Ross, a thane, bemoans his “poor country! / Almost afraid to know itself. It cannot / Be call’d our mother, but our grave,” he might as well be Ewan McGregor in “Trainspotting.”

These connections, both dated and timelessly Scottish, will pass without notice for most watching the Delaware Park production — minds might instead skip across the centuries to our present, American circumstances. Thankfully, Saul Elkin didn’t opt to dress his leads in a power suit and red Ralph Lauren dress, like the controversial Shakespeare in Central Park production of Julius Caesar, which put Donald Trump, basically, in the title role. As much fun as it might have been to imagine Melania as Lady Macbeth crying to the demons to be “unsexed,” the play wouldn’t survive such a grafting. Far better to let the timeless characters let their timeless passions propel them into a timely tale: that of a man without a personality; a man intoxicated by the gross promise of a prophecy; a man who surprises all, even himself, by fulfilling it; a man who holding power hasn’t a clue what to do with it, cutting down all his closest allies, gripped by the twinned and paradoxical beliefs that he is invincible and that everyone is out to get him.

This “Macbeth” is finely conceived and finely executed. There are many reasons to see it. But, above all of these, if this summer you have even for a moment succumbed to the feeling that life is “a tale, told by an idiot … signifying nothing,” you might need to see this play. Bringing wine won’t hurt. 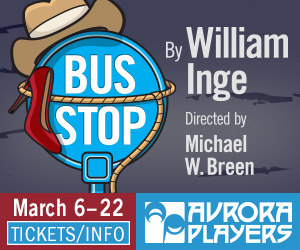