As the year comes to a close, Buffalo Theatre Guide is pleased to announce the TOP 10 Shows of 2018, based on page views! These shows were reviewed by a Buffalo Theatre Guide writer, and the review was shared via social media. These shows will be honored with a certificate which will be mailed to the theatre in the new year. Congratulations to all the winners this year!

Steven Copps and Renee Landrigan in ‘Once’ at MusicalFare Theatre.

The Cast of “Alice In Wonderland” at Aurora Players. Photo by Dori Shear-McGowan.

The cast of “All My Sons” by Niagara Regional Theatre Guild.

The cast of MusicalFare’s ‘Spring Awakening.’ Photo by Chris Cavanagh.

4.  “And Then There Were None” at Aurora Players

The cast of Agatha Christie’s “And Then There Were None” at Aurora Players. Photo by Dori Shear-McGowan. 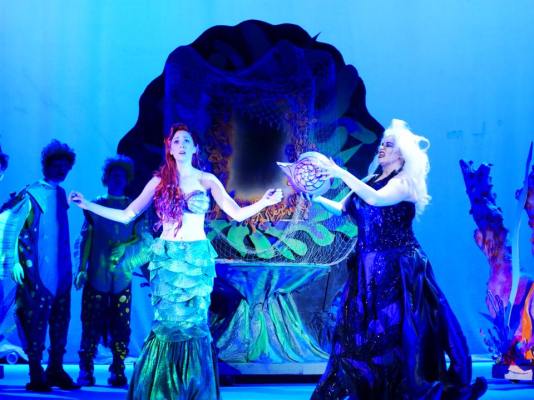 The cast of “Disney’s The Little Mermaid” at Lockport Palace Theatre.

Follow the yellow brick road. Follow the yellow brick road. There is not a single person alive who does not know the story of Dorothy and her adventures in Oz on her journey to meet the Wonderful Wizard. A girl has troubles at home, a tornado sweeps her up, and she falls into the merry old land of Oz. Now, she needs to find her way home. All this in a single day! I would need a nap half way through.

“The Wizard of Oz” is one of my favorite movies, and out of curiosity, I just read the book by L. Frank Baum last year. Talk about a dark children’s novel. Anyway, there are high expectations when an audience comes to see a live production of this show, and Rocking Horse Productions produces an admirable effort, that just needs a little buffing around the edges. More on that later.

Director Jane Navarro assembles a quartet of leads that bring this story to life on the very small stage at the Lancaster Opera House. Leading the show as Dorothy is Sara Marioles Mitch who does a wonderful job emulating the late Judy Garland, and still makes the role her own. Marioles Mitch’s performance of “Over the Rainbow” is well done, and her voice is nice to hear as it rings throughout the theater.

Sean Murphy as the Tin Man is a wonderful choice. Murphy emulates the same vocal prowess as Jack Haley in the film. Murphy’s tap dancing during “If I only Had a Heart” is heart-warming (get it), and he is an audience favorite right from the get-go.

Robby Syruws plays the Scarecrow in this production, and does a fantastic job. Syruws also emulates the voice of Ray Bolger in the film, but still makes the character his own. His performance of “If I only Had a Brain” is humorous and he brings a great stage presence to the role.

Joe Castiglia plays the hilarious Cowardly-Lion. Castiglia has the comedic chops to deliver the funny one-liners in this piece, and also performs “If I Were King Of The Forest’ beautifully.  He has fun on stage, and the audience is happy to come along for the ride.

The ensemble in this show does a marvelous job telling the story. The Munchkins are cute, and are definitely a crowd favorite. The “Ding Dong The Witch Is Dead” number is so precious it brings a tear to your eye. You will absolutely love them.

Overall, this is an admirable feat. The sets by Chuck Ziehl, Derrik Reynolds, Chuck Both, and Douglas Kern are fantastic. These are probably the most elaborate sets I have seen in a Rocking Horse show in some time. They have pulled out all the stops in telling this story and it shows.

Choreography, Daniel Doctor brings a familiar choreography to the piece, and also brings some unique additions, like using dancers to portray the Yellow Brick Road. I have to admit it took me a few minutes to catch on to this concept, but it was definitely memorable. He also used dancers to create the tornado that sweeps Dorothy up. It was a very creative choice, and too is memorable.

Sean Polen’s orchestra plays the music with such great attention to detail. I really enjoyed hearing the familiar songs, with the nice full sound of a large orchestra.

Alright, so this show is a great effort, but here comes the buffing around the edges part. The storytelling and the acting are great, but the scene transitions, and there are many, really add a lot of unwarranted time to this almost three-hour production. Now, I am sure that these will be shortened as the run continues, but I found myself losing interest every time the lights went down and we waited for the scenes to change.

Other than the scene changes, this show is an enjoyable night out, and what better way to start off the 2018-2019 season than to take a trip to Oz?

“The Wizard of Oz’ runs until September 23, 2018, is produced by Rocking Horse Productions, and is presented at the Lancaster Opera House. For more information, click here.