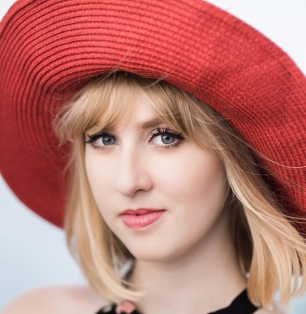 Every theatre company struggles with new ways to engage the next generation audience. For Mary Kate O’Connell, executive and artistic director of O’Connell & Company, two bold moves are keeping her company in close connection with tomorrow’s actors, artists, and patrons. First her company has been in residence at The Park School of Buffalo for the past four years, an ideal place to integrate the value of arts education; and this season, she commissioned a teen artist to create the artwork for the company’s 23rd season.

Gayle Petri, a 17 year old senior at Clarence High School, created the images that will be used on promotional posters, on the website, social media, and on the program covers.

Petri said O’Connell wanted this season’s posters be unique and to look more like original art than a standard photograph. They found common inspiration in the work of the pop artist Peter Max.  O’Connell says, “I wanted to bring his color and vibrancy to our season design. I first was exposed Max’s exciting artistry when I was about Gayle’s age, actually. Gayle, as it happens, is a huge admirer of the Max style as well. Kismet!”

For Petri, this project is a celebration of two things she loves: creating original art and the theatre. “I’ve had ensemble roles in my school’s musicals every year, and have performed with the Lancaster Opera House summer productions for the last four years,” Petri says. “And I’ve been drawing for as long as I can remember. Now I’m looking to make art my career.”

O’Connell and Petri worked together to create the concept for each production to capture the individual mood and nuance of each show. O’Connell says, “Gayle and I discussed every aspect of our project. We combed through different designs that might help to tell our story, we chose the colors for our new look, and the styles that would make the logos pop and command attention.” This type of study and reflection is an important part of the artistic process, and for Petri, it also inspired her. “Mary Kate allowed me freedom of creativity. I was able to put my personality and my ideas into each piece.” Petri was careful to add O’Connell & Company’s iconic “gold star” logo into each design, too, as a subtle and effective brand extension.

Each design was painted in acrylic paints, something different for Petri whose preferred media is watercolors. Using acrylics allowed for more tonal depth which represents the vibe and emotion of each production, Petri says.

The end result is a series of six original paintings which will draw attention and audiences to the theatre. O’Connell is confident in the lure and power of these provocative images. She says, “Gayle’s love and passion for her art and her respect for music, literature and the performing arts give me great hope for how our next generation will support and grow the arts going forward. I love our “new look” and I am so privileged and thrilled to have collaborated with this inspired and creative force.”