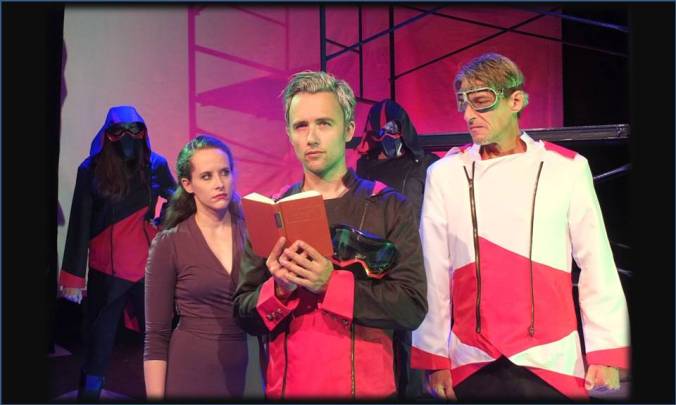 The cast of “Fahrenheit 451” at Subversive Theatre Collective.

Sure, sometimes it’s just easier to go with the flow.  But when the everyday reveals itself to be kind of bleak, well, a bit of something different might be recourse.  It’s kind of like when you are tired of eating the same old thing, day in, day out. And you dissent – it’s what’s for dinner.  And it’s being served with an appetizer of disorder, a side of discontent, and a bit of anarchy for dessert. Wash it down with glass of bliss.

It’s served up year-round at Subversive Theatre, and without exception for this year’s Curtain Up!  Kurt Schneiderman and troupe are offering up one of the classic works of anti-authoritarian, opposition to a world gone twisted with its production of Ray Bradbury’s “Fahrenheit 451.”

. . . an unpretentious production, true and honest to its script and its audience.

This is Bradbury’s somewhat visionary tale and script of a world turned away from intellectualism and introspection, art and individuality.  A world that values mindless self-indulgence, no vision, one-liners, and given way to the powers of the state. Too many disparaging viewpoints and thoughts and feelings of society have led it to downsize, pursue one right way, and mandate it onto the world.   And it’s left to the firemen of the world to ferret out any dissenters and set their books and lives aflame.

One such fireman is Chief Beatty, played by John Profeta.  It is through the Beatty character that Bradbury scripts some of his most affecting world-view dialogue.  Profeta delivers, showing us a man whose convictions have driven him to a state of single-mindedness law enforcement, with a literal joy in his undertaking. Just as adeptly Profeta shows us a side of Beatty, so knowing, and so versed in the dissenting arguments against the state.  Profeta masters this juggernaut of dialogue with his stage presence and the assuredness of a man who’s sure of himself, and sure of the world he is up against. He’s a been there-done that kind of guy, and Profeta does well to suggest to us the underlying anger and weight Beatty carries with him in knowing why the world has turned the way it has.

His underling firefighter is Montag — played by Rick Lattimer — seemingly the heir apparent to the chief.  But when Montag meets a young lady full of life and joy, he is moved, for the lady’s world is nothing like his own.  And he begins to see his own wasn’t so great to begin with. Montag wants to learn, know more, and find happiness. Lattimer keeps the character just south of a wide-eyed kid of wonder, reflecting well a man who must struggle first to unlearn what he has always known.  He slowly begins to see the world differently, and Lattimer’s character progresses in kind.

There are some strong moments with these characters, both of whom deliver Bradbury’s dialogue with skill and conviction.

If the firemen bring this heat to their roles, then standout Colleen Pine, as Clarisse, brings the unruffled warmth.  Pine plays her part with a wistful quality and is consistently mesmerizing, calming, uplifting, delightfully giving inspiration to Montag’s transformation with her own charming qualities and Bradbury’s outstanding script.   And Brendan Didio, as the zealous fireman, Hudson, brings standout fervor. Didio — as does most of the cast — makes a re-appearance in the final scene where he strikes a finer chord of earlier enthusiasm with a slightly more reserved gusto and the more demanding script of the later character.   Both of these relatively young actors are products of the the Niagara University theater program.

All the cast work their craft in and about an austere set, industrial and dark, spotlighting down on the individual actors, casting them in arresting spaces, in a futuristic sense that you might expect of a Bradbury tale penned in the 1950s.  Costumes are inventive and worthy of firemen in a future where almost nothing is flammable anymore, except books. There are flatscreen presentations of state-run television, calling to mind a sort of “Max Headroom” kind of approach. There are wireless headphones, and the design of a robotic creature, — all speaking to the foresight of Bradbury’s tale and the attention to every facet of the original work by Subversive’s design crew.

Bradbury himself penned the play long after writing the novel.  Subversive Theater has kept with its tradition of subject matter, and the vision of Bradbury with this run.  See it if you are game for a bit of grand-scale dissent in an unpretentious production, true and honest to its script and its audience.  It makes you hungry for more.

“Fahrenheit 451” runs until October 6, 2018 and is presented at the Manny Fried Playhouse, and produced by Subversive Theeatre Collective. For more information, click here.