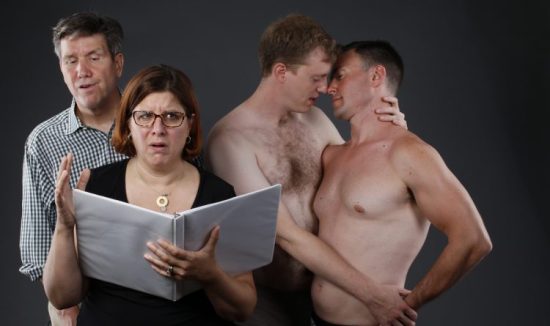 The cast of “Sons & Lovers” by Buffalo United Artists. Photo by Cheryl Gorski.

Well, who doesn’t want to stand up and shout “I am fabulous” when you’re on the brink of turning 50 and you just figured out that your husband doesn’t really like your homemade cookies?

That’s Ellen’s story, the  leading mama in Donna Hoke’s “Sons & Lovers,” opening BUA’s 25th anniversary season. She and Butch are married for almost 30 years and their only child is Bill, a 20-something waiter/actor who has a secret thing going on with Marq. Seems that the rest of the family knows that Bill is gay….except Ellen. There were plenty of hints (“He got into my makeup once and made such a mess, but he was so cute who could get mad at him,” she gushes), and while dad caught on early and grandma gave him a pretty out there gift, Ellen just never put the pieces together.

It took her big birthday (“50 is the new 30,” her son tells her) and her husband’s infidelity to put Ellen in touch with herself and her son, too.

Hoke’s script handles three heavy family bombshells (banner birthdays aren’t always easy, the apple-in-your-eye only child veering from mainstream, and infidelity) with a light touch. This is really a character story, and every last one is endearing (well, except for Butch. Nobody likes a cheater). Even Bill’s coming out is more about timing than content.

Playwright Hoke created the role of Ellen for veteran BUA actress Caitlin Baeumler Coleman: she’s charming and authentic as she frets about her round figure and graying hair. If she’s overplaying her exaggerated facial expressions, maybe it’s so she can play all the way to the back of the house.

Steve Brachmann is the perfect choice for Bill: handsome, vulnerable, and irate when he learns his Marq strayed (at the gym, no less), his finest moment is when his mom badgers him naively about the second toothbrush in his bathroom (it’s for scrubbing the grout, he claims).

Dave Granville and A. Peter Snodgrass play multiple roles with level, even aplomb. Granville’s Butch is road-weary and properly bland as the husband with a midlife crisis fling in his conscience. He’s hysterically funny as a French waiter and an Italian statue-come-to-life romantic at the Trevi fountain. Snodgrass deadpans his character Marq’s verbal lapses perfectly: Marq is a kindergarten teacher who sometimes weaves words like ‘doody head’ into his speech,  even telling Bill that “he should have given himself a time out” instead of fooling around with the gym owner.  Like Granville, he easily slips into his extra roles as campy hair stylist and hot waiter.

Director Todd Fuller uses the small stage as best he can, with actors scurrying through the house to offstage. They worked hard to change out set pieces between scenes.  A couple audio cues were off (don’t answer the phone until it actually rings) were only minor disturbances.

It’s Hoke’s words that sparkle and shine. While coming out is no walk in the park, she lets Bill’s reluctance reveal and then resolve itself without becoming cliché. She nudges her characters to mirror Bill’s strength. Afterall, “life is all about taking chances.”

Running Time: 80 minutes with no intermission.

“Sons & Lovers” runs until October 1, 2017, is produced by Buffalo United Artists, and is presented at Main Street Cabaret. For more information, click here. 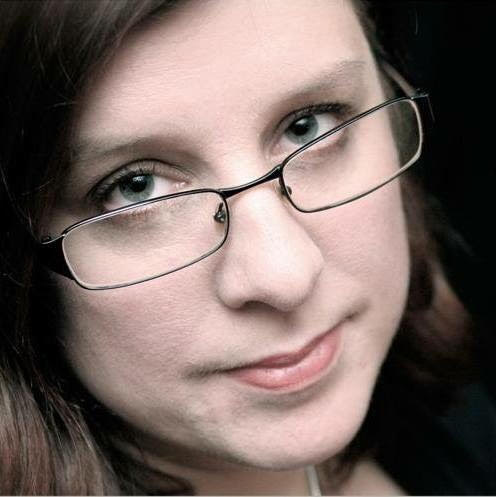 Relationships are so….complicated. First comes attraction, then flirtation, then that delicious push-pull of anticipation, and then you find out …there’s competition. Yikes. And when your paramour has other things going on, well, it’s no picnic. All this and more is central to the plot of “Sons & Lovers,” Buffalo United Artist’s first show of this season. Written by Buffalo’s own bard Donna Hoke, this comedy (yes, comedy) follows a family, new love, revelations, and whole 21st century way of putting it out there.

“Sons & Lovers” began as a staged reading of a 10-minute play three years ago for a curated series of short works that examined LGBT experiences, according to playwright Hoke. Local actor Caitlin Coleman was in the initial cast. “My writing voice was a good fit for Caitlin’s acting voice,” says Hoke, “so I was asked to create a full-length version.”

There are pluses and minuses to working with a concept that already had its 10-minute version on stage. Hoke says, “The tone was already established, and the characters were developed, and their comedic voices were already established” which is a significant part of playwriting. She continues, “But comedy is hard. All of my plays have a comedic element, but maintaining that level throughout is hard. This is tone of the only pure comedies that I’ve written.”

As an actor, Coleman is honored to have a full-length production written with her best attributes in mind, but she feels the pressure, too. She says, “Being the impetus and having the artistic director saying he wants a full length version is significant. I feel so lucky. I want to Live up to that expectation, and do right by Donna’s words. It means the world to me that people who I admire so much have that much faith in me.”

Coleman was drawn to her character Ellen through Hoke’s writing. She says, “Ellen – the character – is a very sweet woman who spent her adult life married to one man, raising one child, and being focused on them. She lost sight on how to take care of herself and what she needs. This story helps her figure out a lot of stuff.”

In what could be a smarmy set up or a predictable plot, Hoke’s writing elevates the story, and for Coleman, this smart, centered writing makes the difference. She says, “Donna’s writing has a certain facility, a clarity. The facility allows you to perform it effortlessly. As I’m learning the lines and going off book, so much of what she writes is intuitive, I know exactly what I’m saying. It makes sense.”

“Sons & Lovers” opens September 15, and while Coleman is the only hold-over from the original cast, the production is taking its own new shape. “We’re at that funny stage before we add tech and costumes, and we’re all really enjoying the process.” And she’s optimistic about the audience reaction, saying, “The audience will enjoy it and be quite touched by the relationships in this show. It’s a different kind of coming out story for the BUA audience.”

Hoke credits the current cast for giving the show its liveliness. “It’s hard to write a successful comedy,” she says. “Throughout rehearsals, the script may evolve,” she comments, and giving full credit to Steve Brachmann, David Granville, and A. Peter Snodgrass in the cast and director Todd Fuller. “Comedy – more than anything else – is collaborative.”

Promotional consideration paid for by the Theatre Alliance of Buffalo.