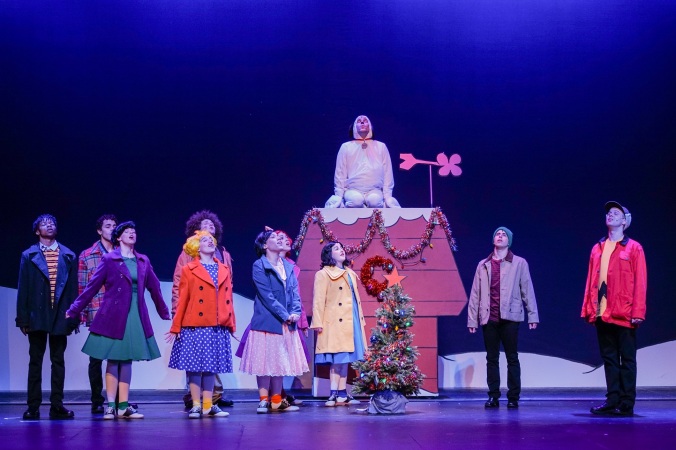 The cast of A Charlie Brown Christmas.
Photo by Benjamin Richey.

Theatre of Youth’s “A Charlie Brown Christmas” is a delight. Charles M. Schultz’s beloved holiday story, based on his “Peanuts” comic strip, debuted as an animated television special program in 1965, and quickly became as representative of the season as Scrooge and eggnog. Its sophisticated anti-commercialism nods and winks – revolutionary then for a children’s holiday TV show – is said to have nearly killed the aluminum Christmas tree industry in the mid-1960s.

. . .a wonderful show. It proves this classic American holiday story, with a genuinely earnest Christmas message, can express itself well in any medium.

What is most impressive about Theatre of Youth’s stage adaptation by Eric Schaeffer is its reverence for the Emmy and Peabody Award winning show, which has run every year on network television since its inception. Even the smallest supporting roles in the ensemble, say Violet (you don’t remember Violet? You will!) is so acutely accurate to Schultz’s simple and elegant illustrative design, watching the show is like viewing the stage through a virtual fantasy lens.

In case you’ve forgotten, or have never owned a television, “A Charlie Brown Christmas” is the story of a hapless loser, Charlie Brown (Dan Urtz) searching for the true meaning of Christmas when secular commercialism drives him into a state of depression as he and his “Peanuts” gang prepare for the holiday. “Child” psychiatrist Lucy (Arin Lee Dandes) diagnoses his condition and assigns him the role of director of the annual Christmas pageant as therapy.

Director Meg Quinn draws out playful and sharp performances from her entire cast. They nail the beloved animated characters’ actions and mannerisms, while adding a flesh and blood comedic expression to what sometimes looks like a ballet of children celebrating Christmas. Barbara Priore’s bright and familiar costume and hair design, and Kenneth Shaw’s intricate, minimalist set design pay devoted homage to the original source.

Dan Urtz gives the anxiety ridden Charlie Brown a frowning, desolate disposition as he mopes about the stage, shoulders hunched high, eyes nervously searching, as the expectant joy of Christmas slowly dissipates from his mindset. Quite the contrary is Arin Lee Dandes, as Lucy. She is confident and brass, busying about the stage like a bundle of misplaced Christmas spirit, hoping Santa brings her a requested gift of real estate. Given the era this story was first presented, she is surprisingly a gender-equal, liberated, indeed dominating young girl.

Lighting designer Todd Proffitt creates an air of foreboding as Charlie Brown and Linus (Lucas Denies) search for the perfect Christmas tree, as a dusk filled urban horizon bears down on the smallish decorative lights of a trees-for-sale lot. It’s an effective scene. So too is the whimsical scene with the characters catching snowflakes on their tongues in an airy and bright winter wonderland.

The special effects are as impressive as the show’s attention to detail. A special floor mat allows the actors to truly ice skate across the stage on a winter pond. Snowflakes gently fall from the sky as white light filters through as if a hole in the Allendale Theatre’s roof was revealed. The transformation of Charlie’s pitiful Christmas tree to a respectable and proud lighted display is seamless.

And what a delight to hear Vince Guaraldi original jazz score performed by a live musical combo. Paul Sottnik (Pianist), Brian DeJesus (Bassist), and Jamie Sunshine (Percussionist) provide an added layer of warmth and cheer to the festive production.

It’s a wonderful show. It proves this classic American holiday story, with a genuinely earnest Christmas message, can express itself well in any medium.

“A Charlie Brown Christmas” runs until December 17, 2017 and is presented at Theatre of Youth. For more information, click here. 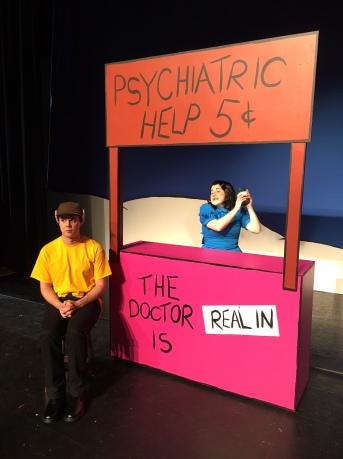 A Western New York Regional Premiere, Theatre of Youth’s production of A Charlie Brown Christmas is based on the story written by Charles M. Schulz and the television special by Bill Melendez and Lee Mendelson. Stage adaptation is by Eric Schaeffer and special arrangement with Arthur Whitelaw and Ruby Persson.

This Christmas, families will enjoy Charlie Brown, Linus, Lucy, Snoopy, and the rest of the Peanuts gang live on stage! Charles Schulz’s classic animations come to life in this wonderful stage play featuring all the classic holiday music in the TV special enjoyed by the young and the young at heart. And, there will be real ice skating on stage!

When Charlie Brown complains about overwhelming commercialism during the holiday season, Lucy suggests that he direct the school Christmas pageant. He accepts, but this proves to be a frustrating endeavor. Audiences will enjoy Charlie Brown and his friends as they discover the true meaning of Christmas.

The 17-18 Season at TOY brings plays with important and timely messages,” said Artistic Director Meg Quinn. “The 45thAnniversary Season was dedicated to the two women who founded Theatre of Youth—Rosalind Cramer and Toni Smith Wilson,” says Quinn. “Roz and Toni believed children need and deserve to have their stories told in the theatre and that we must tell those important stories with respect and care. For our 46th season, each play speaks to the child audience about growing up, learning about the world, and finding your place in it.” This will mark Quinn’s 26th year as Artistic Director.

Parents and children will also enjoy a photo with the cast and crew after all performances.